Home > News > From Beetle to Polo via Golf: 50 years of VW ownership is celebrated 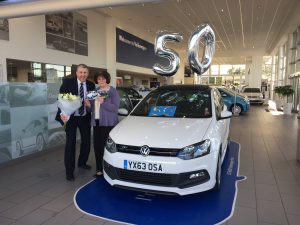 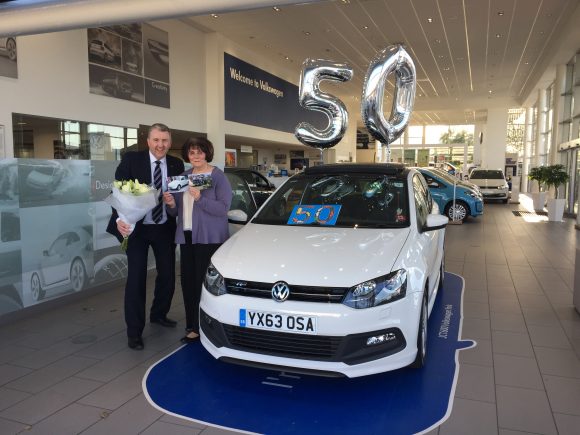 From Beetle to Polo via Golf: 50 years of VW ownership is celebrated

A DEALERSHIP in York has helped a customer celebrate 50 years of Volkswagen ownership.

JCT600 Volkswagen York invited Karin Wilson for coffee and cake to begin her half-century celebrations, which also included gifts and a letter of thanks from Volkswagen UK director Alison Jones.

With her total now standing at 16 Volkswagen over those 50 years, Karin, who lives in York, has been looking back over her half-century of motoring, which began when she bought a cream-coloured Volkswagen Beetle from North Riding Motors in 1967. 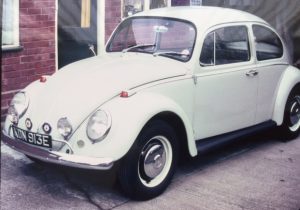 I loved the Beetle right from the beginning,’ she said. ‘It was brand new and it cost £585. I remember other Beetle owners would wave at you as they drove past. We drove it to Austria and Germany on holiday. It was slow up the mountain passes, but we knew it would get us there and back.’

Another model that stood out for her was the Danbury Caravette Campervan. ‘It was a 1968 model and we bought it in the 1970s. We took it on quite a few holidays – my daughters really enjoyed it, too,’ she said

As well as the Beetle and Caravette, she has owned another Beetle, three Golfs and 10 Polos. Her current car is a four-year-old Polo R-Line with a 1.2-litre TSI engine.

‘Volkswagens are safe and secure, and they feel safe and firm to drive,’ she said. ‘Volkswagen has a reputation for making reliable cars and that is what we have found all these years. It has kept us coming back. And they always look good.’

JCT600 Volkswagen York head of business Andrew Exon said: ‘This is a fantastic story. We’ve obviously known Mrs Wilson for a long time and we wanted to celebrate her landmark.

‘We look forward to seeing her again in the future, and I think this is a tremendous example of customer satisfaction.’

MORE: Record revenues at JCT600, despite pressure on margins and rising costs