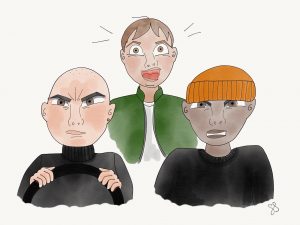 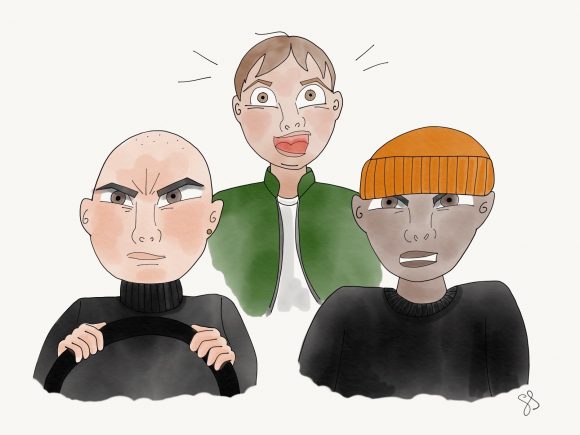 HIS column is probably Car Dealer’s most popular feature – and for our 100th issue recently, we asked the brilliant Big Mike to do something a little bit special –list his top 10 test drive disasters of all time.

Earlier this week, we published the first entertaining instalment online – and here is the second (and final) part. Illustrations by Scarlett Josse. 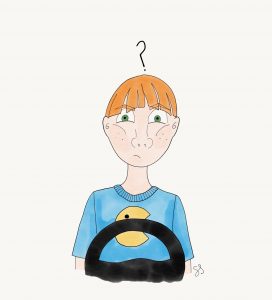 Going back to one of the most frightening experiences earlier on in my career, I had a cheap Mini 1000 part-exer for sale back in the late Seventies, which attracted all sorts of attention from younger motorists, as you’d no doubt expect.

One of them was a young lad in his first year at Birmingham University, as scruffy, opinionated and infragrant as you’d expect.

Eyeing up the Mini as a potential first car, he wandered over and asked if he ‘could take it for a spin, mate’. Obviously I didn’t trust the little scrote, so I grabbed my trilby and squeezed into the passenger seat next to him. We’d lurched as far as the edge of the lot before I asked him to kill the ignition, and he didn’t know how.

Turned out he’d never once been behind the wheel of a car in his life… And I certainly wasn’t prepared to be his first victim. 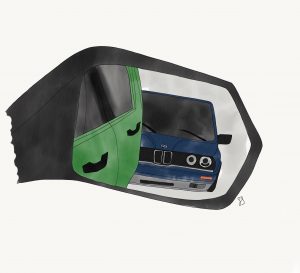 Some clichés are absolutely true, and this was no more apparent than in the 1990s, whenever I had a six-pot BMW in stock. Don’t get me wrong. I love a nice Beemer, and those mid- to late-Eighties models that were my premium stock back in those days were truly lovely cars. Unfortunately, they also tended to attract a ‘particular’ type of person, perhaps best summed up as aggressive.

On one occasion, I had a guy in his thirties turn up for a test drive in an M3-bodykitted 325i and proceed to drive in a terrifyingly forceful manner, culminating in an incident at some traffic lights in Sparkbrook. Having spent the past two miles about an inch from the rear bumper of a white Transit, it all came to a head when not just one, but both, doors of the Transit opened and both driver and passenger got out brandishing garden tools.

I was a younger and leaner man back then, and not wanting to end up with my head on a pitchfork, I leaned across, tore the keys out of the ignition and legged it. It took me a good half-hour to summon up the courage to walk back to the BMW, and I was quite relieved to find there was no blood all over it… 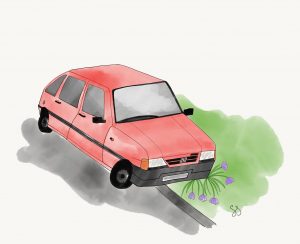 Some people should never be let loose behind the wheel of a car, to the point where I find it impossible to believe they’ve ever been awarded the honour of a driving licence. The shortest test drive I ever went on (if you discount the aforementioned student that never even got off the lot) was a grand total of half a mile, or even just under.

It ended in a municipal flowerbed, after taking out a bench and half a bus stop. The car in question was a Fiat Uno, and the driver a middle-aged lady who declared it ‘too big and quick’ for her to handle as the police were calming her down with a cup of tea (I was beyond calming down, as the no-claims bonus on my trade policy was in tatters). In fairness, if I’d bothered to take a look at the bruised and battered Austin A35 that she’d turned up in for the viewing, I might have realised that a ‘modern’ car may have run away with her, but it baffles me to this day how it all actually happened – the road from my car lot to the bus stop is a dead straight dual carriageway with perfect visbility…. 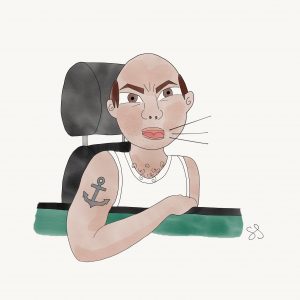 I was admiring a couple of Mk 3 Capris at a local classic car show the other day, only to be reminded of an experience back in the summer of 1987, where I took a bloke out on a demo with a 2.8 Injection Special. Typical of a single bloke in his Twenties, the driver had something of an eye for the ladies. And a mouth for them, too.

After less than 15 minutes, we’d attracted the death stares of several boyfriends as he pipped the horn at anything with a nice bum, and quite a few without, including one long-haired creature in skinny jeans that, when inspected in the rear-view, quite clearly had a beard.

Occasionally, he’d even slow to a crawl and ask them, quite forwardly, to ‘show us yer tits’ on the basis (he explained) that if you didn’t ask, you didn’t get.

Anyway, we didn’t get. But what we did get, rather annoyingly, was an entire bag of ketchup-smeared chips through the window and right into my lap. Birmingham girls are classy like that.

The perfect punter (that wasn’t)

And now for my piece de resistance…

As the old proverb goes, if something is too good to be true, it probably is. But car dealers can’t help themselves when there’s a promise of an easy buck (come on, tell me you’re not the same…) so it’ll come as no surprise to any of you that I got well and truly sucked into this one; quite probably the most terrifying experience of my entire career.

I think it was about 1995 or 1996, and like many dealers I had a little plinth at the front of the lot on which I’d park my ‘Car of the Week’. On this particular occasion, COTW was a G-plate Vauxhall Carlton GSi 3000 in solid red (weren’t they all?) and it was an incredibly lovely car, as well as a bloody quick one. At £7,995 it was both the most expensive car I had, and also a bloody bargain.

Having spent ages cleaning and detailing it, it didn’t come as a huge surprise to me when a youngish chap turned up, gave it the once-over and offered to buy it there and then, without even test-driving it. He’d been looking for a GSi for ages, he said, and as soon as he saw mine advertised in the local rag he knew he’d end up with it – after all it was a low-mileage example in immaculate condition, with a full MoT and service history. He’d clearly done his homework.

‘Fair enough,’ I said. ‘When would you like to come and pick it up?’

‘Well,’ he said. ‘I was thinking that if we nipped down to the bank in it, I could get you the money here and now, fill in the V5 and drive it home.’

He looked good for it – he was clean, well-groomed, articulate and friendly – so I saw no reason not to trust him to go through with the deal. Plus, if he at least drove it to the bank, he’d have a proper test drive, and thus there’d be less of a comeback on me if he did subsequently turn out to be a screamer.

Driving to the bank, then, we had a bit of a general chit-chat. He worked in the finance sector, he told me, and was also a fan of high performance rear-wheel-drive cars, as when you spend your days handling large amounts of other people’s money, it was fun to just jump in a car and put your foot down once in a while…

He then did that, and grinned as the Carlton picked up pace.

I first got the hint that something was a little odd, though, when he slowed down to a near crawl not far from the bank.

‘What are you doing?’ I asked.

‘Ah, well, don’t want to be too early,’ he said, cryptically. Just as he did, an enormous mobile phone in his pocket rang three times, and he nailed the pedal to the metal, slewing sideways into the layby outside the bank.

‘What the….?’ was as far as I got, before two bulky blokes in balaclavas came charging out of the entrance with sports bags, threw open the boot, chucked them in and then dived into the back of the car.

To the echo of distant sirens, we drove south out of the city, laying down a trail of rubber as the big old Vauxhall fishtailed out of each roundabout.

‘Sorry about this,’ said one of the guys in the back, as he pulled a slightly damp cloth across my mouth.

Thankfully, I remember little else.

I woke up, blindfolded, somewhere in the Lickey Hills south of Brum, and I never saw the Carlton, or its driver, again. Though I did see someone who looked very similar driving a Sierra Sapphire Cosworth on a Crimewatch reconstruction.

I didn’t dial in, though, because I couldn’t be certain. Besides, there was the envelope.

When I finally came to, I found it tucked into my jacket with ‘taxi fare’ written on the front.

On the back, scribbled no doubt in the hand of someone not involved directly in the robbery, were the words ‘Cheers for the car, mate. Honour among thieves – these notes are clean’. And there were eight grand’s worth in there…

So with £8k’s worth of laundered dirty money in my sheepskin, did I allow my conscience to guide me and do the right thing?

Course I did. And I’ll let you decide what that was…