Black Cars Matter advert for Audi A4 by Lingscars.com is ruled to be irresponsible and offensive

The post, published on June 16 and advertising an Audi A4, started with the comment ‘***BLACK*** In light of recent events, I’m resurrecting my Audi deal:’.

Underneath it was an image of a raised black fist with the text ‘Black Cars Matter’ as well as the words ‘I asked Holly for a headline for this A4… and she said: “Once you go black, you never go back!”‘

The advert also referred to a ‘big gearknob’.

Three people complained to the Advertising Standards Authority, saying it was insensitive, offensive, likely to cause serious offence, and was socially irresponsible.

Lingscars.com refuted the claims, saying the phrase was a pun on the launch of the Audi Black Edition, similar to the one pictured, and that ‘Once you go black, you never go back’ was a well-known phrase that was inoffensive to black people.

It added that the image of the raised fist was a Black Power movement symbol, arguing that it was positive and not seen as offensive in other contexts, such as the Grand Prix where Lewis Hamilton raised his fist.

However, in its ruling published today (Sep 23), the ASA upheld the complaints.

It said the ad appeared soon after the Black Lives Matter protests and during a public debate about racism in the UK.

The ASA stated: ‘We considered that people would understand the headline “BLACK CARS MATTER”, the image of the raised fist and the name “Audi A4 Black Power Edition” to be references to the Black Lives Matter and Black Power movements.

‘By using that slogan and iconography simply to draw attention to an ad for a car had the effect of trivialising the serious issues raised by those movements.

‘The claim, “ONCE YOU GO BLACK, YOU NEVER GO BACK!” in addition to the claim “BIG GEARKNOB”, we also considered was likely to be seen as objectifying and fetishising black men.’

It said the ad was for an unrelated product alongside references to recent protests opposing racism against black people.

As such, the claims ‘were likely to cause serious offence on the grounds of race’, and it therefore ‘considered the ad was socially irresponsible’ and breached the codes on social responsibility as well as harm and offence.

The ASA said the advert mustn’t appear again in its current form and ordered Lingscars.com to remove it, but it was still there at the time of publication of this story on September 23.

The Lingscars.com Facebook page posted this response when it was informed of the ASA’s ruling last week: 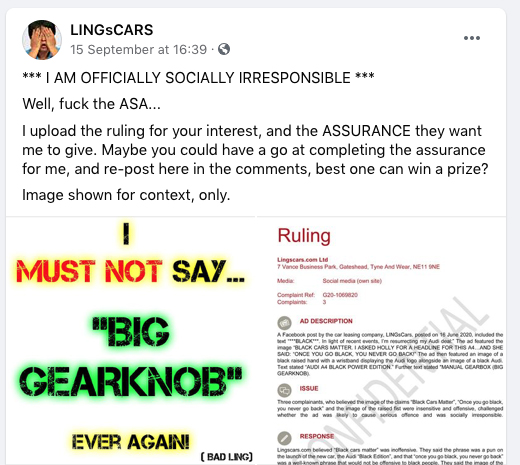