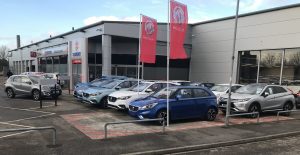 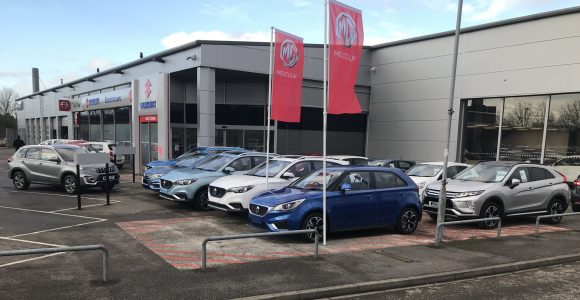 Blackshaws has added two new franchises to its business in Northumberland.

For many Mitsubishi dealerships, like Blackshaws, the news the Japanese car maker would be pulling new car sales from the UK has posed problems, but also opportunities.

Managing director Will Blackshaw joined the Car Dealer Podcast last week, and talked about the big changes taking place in his business.

He has added MG and Isuzu and will be adding another opportunity later in the year when the Mitsubishi sales end completely.

‘We went live this week officially, within the lockdown situation, with MG,’ he said.

‘Unfortunately, it’s not been the most exciting franchise launch ever but we’re seeing a lot of web traffic building up for that, a lot of brochure downloads.

‘We’ve got the products sitting there, which look superb.

‘All the team are raring to go so we just need Boris to let the shackles off and we can get stuck into that one.’

Blackshaws now has MG alongside its existing Suzuki new car franchise, a Nissan approved repair centre in Alnwick and Isuzu will soon be joining Mitsubishi in Morpeth.

He said: ‘We should expect our new Isuzu trucks in a couple of weeks. We saw the trucks in Birmingham at the back end of last year and they look superb.

‘We’ve added Suzuki approved repair at that site. Then later in the year, once Mitsubishi disappears from a sales point of view, it’ll open up some showroom space to consider another brand.

‘I’m ready for a little breather from adding franchises at the moment, though.’

While the team is raring to get back to normal, Blackshaw explained that the business was still strong. Currently, its delivery driver is being kept busy and if things continue this way they may need to employ another one.

He talked about his competitive streak, and said he had seen some things that online car retailer Cazoo do well and that had made them think differently about their processes.

Even seeing the Cazoo trailers driving to deliveries near him made him want to upgrade their branding so customers were getting ‘showroom quality’ at home.

While he admitted only around 10 per cent of customers choose home delivery, adding the personal Blackshaws touch from the family business is still vitally important.

‘We’ve got a driver and one thing he does is call the customer to introduce himself and say he’s on the way,’ said Blackshaw.

‘We talk about Amazon and others where you get your text messages, but this is us trying to add the personality back into the digital or online selling journey.

‘No disrespect to logistics companies, but we want them to know this is Blackshaws bringing it to you.’

He added: ‘There are then people who are comfortable to buy online. Granted, processes aren’t 100 per cent click to deliver without a little bit of integration but I think it comes back to the importance of building that experience.

‘I think when people come to the showroom, some enjoy the coffee, want the test drive and, from buying a car typically every three years, they might as well wait a couple of extra months.

‘I do think this time we’ll see an even higher pent up demand than we did last time.

‘From our web traffic, I believe we will see a stronger catch up period than back in June last year.’

Shopping online has brought other benefits to the business though, and Blackshaw talks about the speed of the deal dropping from an average of around an hour to around 20 minutes.

The Blackshaws boss is optimistic that with the processes they have put in place to make their dealerships safe, they will be able to open soon, and hopes it could be at the same time as schools.

He said: ‘For me, I like to think that if schools can reopen on March 8 then car dealerships could too, only because by then the vaccine will have had its three weeks in the majority of the most vulnerable.

‘I’d like to think that we’ve invested so well and done such a good job that we’ve got a very safe process now.

‘I’m not having a go at garden centres but we know they were allowed to continue and car showrooms got to be safer than that.

‘If I thought what we were doing was dangerous, I’d say no. If we were told we could open tomorrow, I think in my mind I’d say yes we should do it because we’re confident it’s a safe environment.’

The Car Dealer Podcast is released every Friday. You can subscribe on your favourite Podcast platform or listen to it on Spotify here.