Home > Blog > Blog: Who has the edge, salesMEN or salesWOMEN? 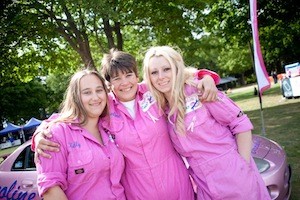 Blog: Who has the edge, salesMEN or salesWOMEN?

COME on, we’re all thinking it, aren’t we? When it comes to sealing that ultimate deal, who really has the edge in the showroom – the ladies or the gentlemen?

Like the automotive industry as a whole, the motor trade is clearly male-dominated and customers are more likely to buy their next car from a man.

Funnily enough, research carried out in America by Vroom Girls – a car site for women – revealed that women influence approximately 80 per cent of all vehicle purchases, so surely having them working in your showroom wouldn’t be such a bad idea?

Looking at the UK, only seven per cent of car executives are female. However, that seven per cent are often highly regarded members of the motor trade – you only have to do a quick search on Google to see that.

Back in July, a Kia dealership based in Greater Manchester boasted of its success thanks to its newly found ‘woman’s touch’.

Kate Leach is a top-performing sales specialist at the dealership on the Middlebrook Retail Park and believes that female customers feel more comfortable around salespeople of the same sex, which can lead to a spike in sales.

She told the Bolton News earlier this year: ‘It’s about listening to the customer’s needs.’

An HPI survey found that females actually make more informed choices when it comes to buying a used car, with 51 per cent of women consulting a family member or a friend before making a purchase, in comparison to just 27 per cent of men.

To top that, the DVLA this year revealed that female car owners now make up more than 40 per cent of the total UK market, while women find dealing with a female member of staff much less intimidating than talking to a man.

But for Caroline’s Cars in Norwich, the story is quite different. The small garage is quite literally glowing neon pink and run by a team of female staff (and a chap who doesn’t mind dressing in pink overalls on a daily basis).

Tucked away in a rural industrial estate, owner Caroline Flack started her business more than 10 years ago in order to strike back and help provide an alternative option.

From a workshop perspective, the use of jargon coupled with some people’s naivety about cars and their engines can sometimes cause problems, for both men and women.

But not at Caroline’s Cars where members of both sexes flood into the small used car dealership and instantly feel comfortable leaving their vehicles in the hands of Caroline and her team.

She told the Daily Mail: ‘Garages can be a terrifying experience for many women – I know women who prefer going to the dentist than going to a garage.

‘I know women who have been ripped off, told their cars needed expensive work doing when it didn’t or just have men talking to their boobs and being leery.

‘Women come here because they know they can trust me, and that I’m not going to rip them off. I want to encourage women to not be afraid and feel safe – it’s ingrained in society that women automatically know nothing about cars.’

She added: ‘It’s not just young women who prefer a female garage; men are exactly the same about big burly mechanics and their ‘backstreet’ reputations.’

Sadly, even with these courageous women trying to make a difference, there are still very few female salespeople in the industry – but it sounds to me like there definitely should be more if dealers want to start upping their sales targets.

Kate Leach told her local newspaper: ‘For some reason there are hardly any women doing this role.

‘I suppose it’s seen as a man’s job but I don’t know why because I think I have the upper hand a bit – it’s easier for a woman to speak to a woman isn’t it? Woman-to-woman. They don’t feel as intimidated somehow.’

Maybe then it’ll always be a case of quality over quantity. But perhaps the answer to getting more female car buyers into the showroom is to actually hire them first.

What are your thoughts? If you would like to share your opinion, I’d love to hear from you! You can Tweet me directly on @1Sophie_W or the Car Dealer team on @CarDealerMag.