Brakes are pulled on Clarkson, Hammond and May’s DriveTribe website

The car culture website DriveTribe is to close at the end of this month.

It was started in 2016 by Grand Tour trio Jeremy Clarkson, James May and Richard Hammond, with them as figureheads, after millions of pounds of investment from various parties – 21st Century Fox and Breyer Capital injected about £4.8m and £4m into it respectively.

The idea was to combine contributions by the site’s users with content from experienced staff writers.

DriveTribe’s chief marketing officer, Jim Murray Jones, appeared on one of the panels at our CDX expo in 2018, alongside What Car? editorial director Jim Holder, to talk about what consumers want – the video can be watched above.

DriveTribe’s name was derived from the idea that people could create ‘tribes’ for any automotive subject, creating communities around specific areas, such as Japanese cars or Formula 1.

But in spite of all the investment, the company has struggled financially since the pandemic started. 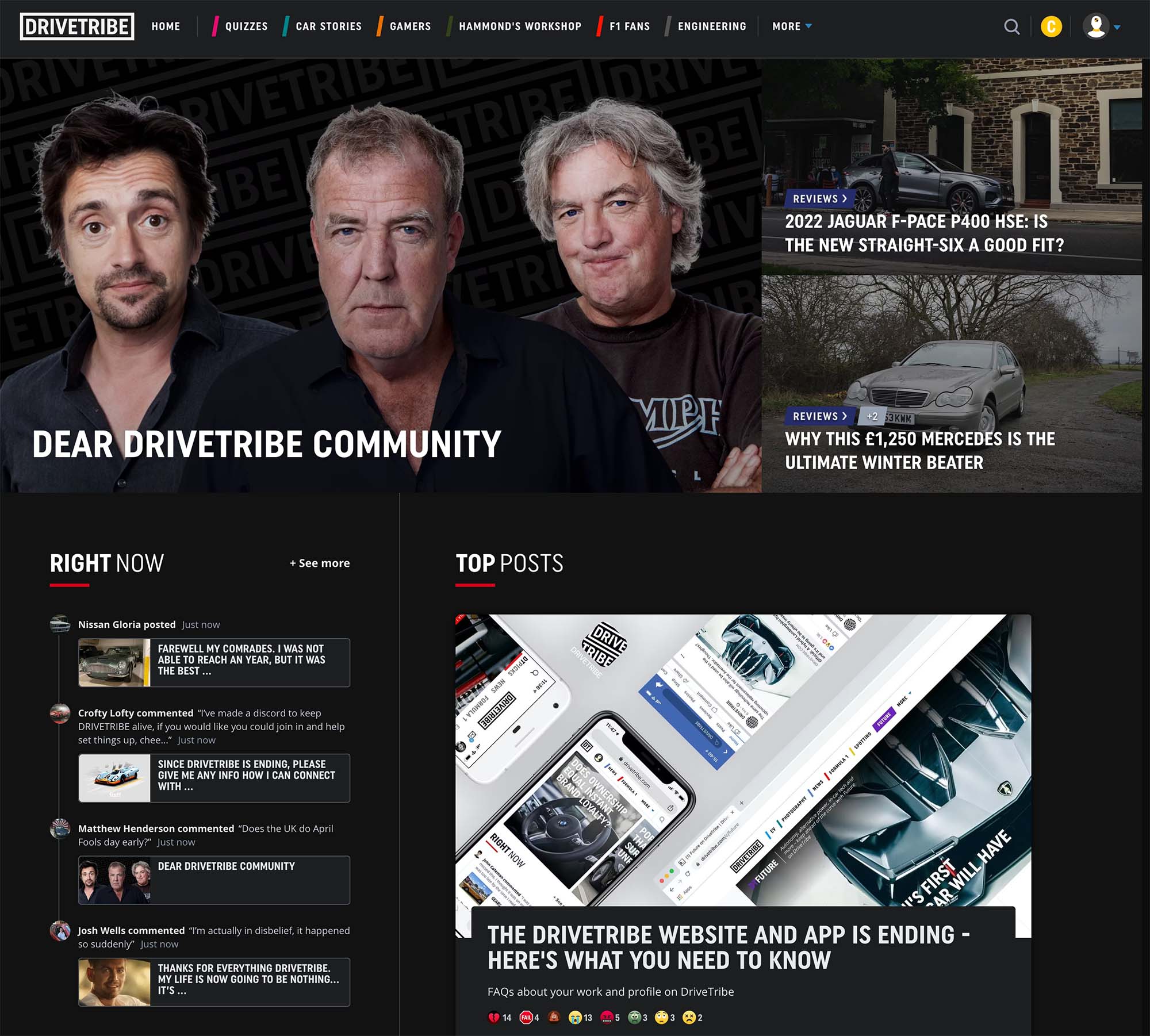 The DriveTribe homepage on January 10, 2022 shortly after the closure announcement

An online statement said: ‘The protracted global shortage of computer chips has caused a number of challenges for the automotive industry, and led to severe reductions in marketing budgets across the industry.

‘This has made for an incredibly difficult operating environment for businesses like ours which are dependent on advertising.’

Clarkson said: ‘We’re all really disappointed that challenges in the industry – not in the least helped by the ongoing pandemic – have simply made it impossible to continue with the business in its current form.’

The social media pages will carry on, with Hammond as the focus. Content will also continue being uploaded to DriveTribe’s YouTube channel, which boasts two million subscribers.

Meanwhile, in a separate blow for Clarkson, his planning application for a restaurant on his Oxfordshire farm has been rejected by officials.

The 61-year-old had sought to create a 50-cover establishment inside a lambing shed at his Diddly Squat Farm in Chadlington, Chipping Norton.

However, West Oxfordshire District Council’s planning committee threw out the scheme yesterday (Jan 10) following 70 objections, according to a BBC report.

Opponents had said it would ‘create further erosion of the tranquillity and would have a significant environmental impact within the Cotswold Area of Outstanding Natural Beauty’, while others stated it would ‘make the traffic situation worse’.