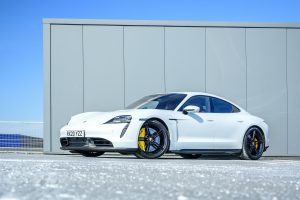 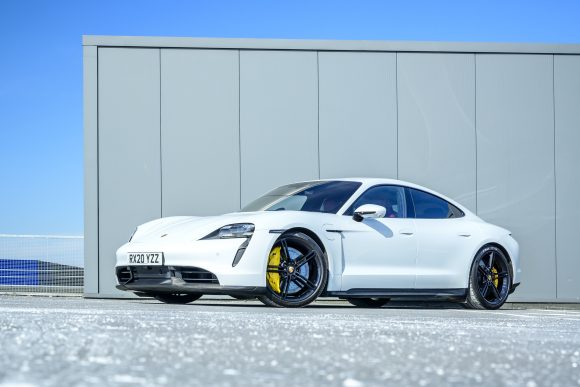 The Taycan is a hugely important car, not only for Porsche, but also the car industry. It’s the first electric Porsche, the first car to truly go head-to-head with the Tesla Model S, and it also debuts some clever EV technology that will likely trickle down to more mainstream cars in the future.

It’s considerably more expensive than the Tesla, but as Porsche proved with the Cayenne, when it turns its hand to something new it’s invariably successful. So, with the Taycan now in the UK, we headed to Porsche’s Reading HQ for a socially distanced test drive to see if this is the game-changing EV we all hopes it is.

Porsche hasn’t messed around with its first electric vehicle. There’s no chopped, changed and adapted petrol car parts here – the Taycan has been built to be an electric vehicle from the ground up. That means the batteries and motors have been integrated into the chassis in an optimal way which allows for a surprising amount of cabin space and an ultra-low, sleek exterior.

That new technology I mentioned earlier? The headline is the 800-volt electrical system, which is twice what you typically get from an EV. The most obvious benefit is that you can charge it more quickly, with Porsche claiming you can add up to 60 miles of range in just five minutes. A 0-80 per cent charge? About 22 minutes at its peak charge rate of 270kW.

There are two electric motors in the Taycan, one on each axle, providing all-wheel drive. While the front motor has the usual single-speed gearbox, the rear motor has a two-speed unit, giving it an ‘acceleration gear’. The combined power output is 616bhp and 1,050Nm of torque, but a launch control mode unlocks a face-melting 750bhp.

The first couple of times you experience that kind of performance under full acceleration from a standstill, it not only leaves your stomach behind but makes you feel light-headed and a little bit queasy. It’s fantastic. Like all electric cars, it’s the instant torque that gets you – while a fast petrol-powered car feels like it gets faster as you accelerate, in something like the Taycan it’s that first couple of seconds that really gets you giggling. The only word is violent, and it’s addictive. 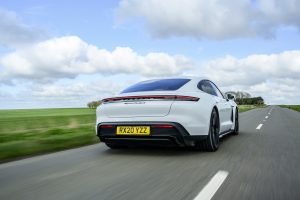 It’s difficult to know what to expect from the Taycan. It’s got four doors and, size-wise, it’s like a shrink-wrapped Panamera, so you might be expecting a plush GT, but the sports saloon styling and performance figures mean it could almost be an alternatively fuelled 911 rival.

After spending a day behind the wheel it’s clear it plays both sides brilliantly. The first thing that hits you is the refinement. Driving on city streets and motorways it’s quiet, comfortable, and easy to drive. But when you find a B road it comes alive, feeling even sharper and more nimble than the 911 Turbo S we tested the same day.

Porsche has absolutely nailed the design of the Taycan. It looks like it’s from the future with its simple, elegant curves that flow from front to rear in a slippery, aerodynamic shape. It manages to look like a sports car and a big family car in equal measure, with its four-door shape blending beautifully with the coupe-like swooping rear roof and wide, hunkered-down stance.

Up front, the unique headlight design, with the fang-like intakes on either side, could be an acquired taste, but it certainly stands out on the road. Meanwhile, the sleek rear end gets Porsche’s signature full-width LED taillight. Porsche’s designers resisted the urge to overdesign the Taycan and it’s all the better for it. 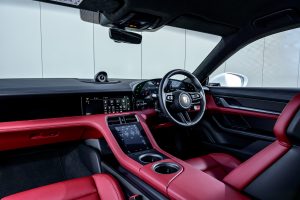 This review is in danger of being a bit too positive, so it’s time to nitpick – this Turbo S version is a £140k car after all. The interior is brilliant in so many ways, such as with the exquisite build quality we’ve come to expect from Porsche, the excellent driving position that’s sports car low but with SUV-like vision, and the surprisingly spacious rear seats.

However, it didn’t have a particularly quantifiable ‘special’ feeling. The infotainment system works great, but the graphics feel a bit outdated in this futuristic setting, while the lower climate control/trackpad screen had too much dead space. Furthermore, while the Alcantara-esque Race-Tex material on the steering wheel looks great and feels racey, it began to rub after almost an hour cruising up the motorway. For daily duties, the leather alternative might be a better option, though that does mean losing the gorgeous Race-Tex seats, so consider your priorities.

Of the many optional extras on our car, some highlights include the Porsche Dynamic Chassis Control Sport (£2,315) for extra sporty handling, thermally and noise-insulated glass (£1,301), folding exterior mirrors (£210), and Porsche InnoDrive with adaptive cruise control (£2,172).

WhatCar? called it the ‘benchmark for electric car handling and interior quality’ while Top Gear Magazine said ‘it feels like you’ve taken a giant leap into the future of motoring’.

The Porsche Taycan Turbo S is not a car you buy with any sort of consideration for the health of your bank balance. It’s unarguably better than a Tesla Model S, but is it tens of thousands of pounds better than the range-topping model from the Californian firm? That’s a question for wealthier people than me.

What’s clear though is that the Taycan sets a new benchmark in the segment. It looks like it’s from the future, handles like a sports car and could leave most in its dust off the line, and doesn’t emit any harmful gasses. If you can afford one, there really aren’t many reasons not to get one…

DEAL CLINCHER
It feels faster than a Model S with all the build quality you’d expect from a six-figure car.