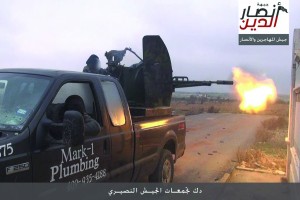 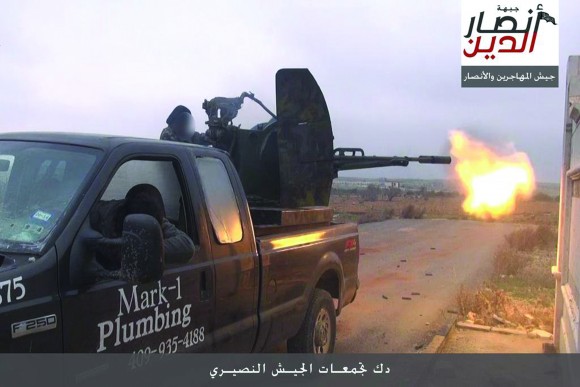 A PLUMBER is suing a car dealership after his traded-in pickup was pictured being used by jihadists with his business decal still in place.

Texan Mark Oberholtzer sold his 2005 Ford F-250 truck to Houston dealership AutoNation Ford Gulf Freeway. The vehicle was then sold on and a tweet with a picture of black-clad fighters firing a heavy weapon from the load area – above – went viral in 2014.

The plumber had to close his business for a week and leave town after receiving about 1,000 phone calls from people ‘around the nation’ making threats ‘in grossly specific terms’ against Oberholtzer, his family and his employees, according to the suit filed at a local Houston court.

Oberholtzer was visited by officials from the FBI and Department of Homeland Security, who ultimately told him to be careful. And his secretary quit out of fear for her safety. Oberholtzer is screening phone calls and threats to this day, according to the lawsuit.

Autonation Ford Gulf Freeway spokesman Marc Cannon said the dealership wasn’t responsible for the truck eventually ending up in Turkey and then in the hands of alleged terrorists because they simply sold the vehicle to a used car store in Houston.

‘We didn’t export it over there,’ Cannon told NBC News. ‘It came to our dealership, and it was passed on to the auction.’

Oberholtzer is seeking $1 million in lost profit after his ‘company’s reputation and standing in the business and local community was irretrievably damaged’, the suit said.