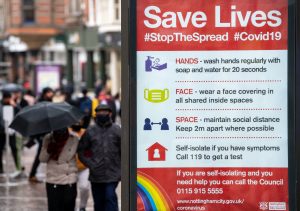 Car dealers will reopen on December 2 in England as the government reveals it will head back to a three tier system instead of extending the lockdown.

Non essential businesses – which includes car dealers – have been forced to close during the second lockdown and operate remotely instead.

However, the prime minister Boris Johnson is set to reveal to MPs tomorrow that the country will return to a three tier system – and even under the highest tier car dealers were previously allowed to operate following Covid Secure guidelines.

Johnson is expected to detail his plan for winter, which includes details on how families can see their loved ones at Christmas, to MPs on Monday.

More areas of the country are expected to be placed into the higher tiers to keep the virus under control to ensure further restrictions are not needed, No 10 said.

Ministers will decide what tier each area will be placed into on Thursday and MPs are expected to be given the vote to approve the new tiering system in the days before it comes into force on December 2.

The tiers are expected to be ‘strengthened’ to safeguard the gains made during the national lockdown, but it is understood that the controversial 10pm curfew on pubs and restaurants will be altered under the new system.

Johnson will say that, while last orders must be called at 10pm, people will get an extra hour to finish their food and drinks with opening hours extended to 11pm.

The Cabinet is expected to discuss and sign off the plan today before the PM announces it to Parliament tomorrow.

The plan will set out how people will be able to spend their Christmas, but ministers have made clear that the festive season will be different to normal, with some restrictions expected to remain in place.

The government is optimistic that restrictions can be gradually reduced in the run-up to spring, providing vaccines are approved by regulators, allowing a plan for the rollout to begin next month before a wider programme in the new year.

Marshall Motor Group CEO Daksh Gupta said that if the tiered plan was true it was ‘great news’.

He told Car Dealer: ‘If correct, I think this is great news. It marks the fact that we can see light at the end of the tunnel.

‘There’s been lots of positives in recent weeks. Firstly, political moves here and in the US appear to have been well received. That, and the announcement of two potential vaccines has caused stock markets to rally which is driving confidence up.

‘Finally, if we can secure a Brexit deal in the next few days it will really be Christmas coming early as we have lived with shadow of Brexit cast over the automotive industry for four and a half years, here’s hoping!’

Mike Jones, chairman of ASE Global and compiler of the forthcoming Car Dealer Top 100 list added: ‘I’m hopeful all dealers will be allowed to open given that they proved how safely they could operate prior to this lockdown.

‘Profitability was strong ever since reopening and retailers will be keen to build on this momentum, making an overall profit for 2020 despite the huge levels of Covid-related disruption.’

The prime minister will be wary of a rebellion from backbench Tory MPs who are opposed to new restrictions.

They want the government to produce evidence to show measures ‘will save more lives than they cost’.

The plans emerged as the government announced a further 341 people had died within 28 days of testing positive for Covid-19 as of Saturday, bringing the UK total to 54,626.

A No 10 spokeswoman said: ‘Everyone’s efforts during the current national restrictions have helped bring the virus back under control, slowed its spread and eased pressures on the NHS.

‘But the Prime Minister and his scientific advisers are clear the virus is still present – and without regional restrictions it could quickly run out of control again before vaccines and mass testing have had an effect.

‘That would put in jeopardy the progress the country has made, and once again risk intolerable pressure on the NHS.’

There were fears a higher Tier 4 could be put in place as the country emerged from lockdown that would place some parts of the country under the same measures as they face now.

Car industry leaders had warned that they needed to form a united front to ensure dealers were excluded from any businesses forced to shut under those tougher measures.

What was the original three tier system?

Areas in the first tier – medium alert – were subject to the same national measures which were in force at the time across the country including a 10pm curfew for pubs and restaurants and a ban on most gatherings of more than six people.

Under the second tier – high alert – household mixing was banned indoors while the rule of six continued to apply outdoors.

Tier 3 – very high alert – banned social mixing both indoors and in private gardens, while pubs and bars were told to close unless they could operate as a restaurant. Car dealers were allowed to remain open.

Local leaders were to help determine whether other venues should be closed, such as gyms or casinos, in very high alert level areas.

But the system faced criticised as not being strong enough to reduce the spread of the virus. 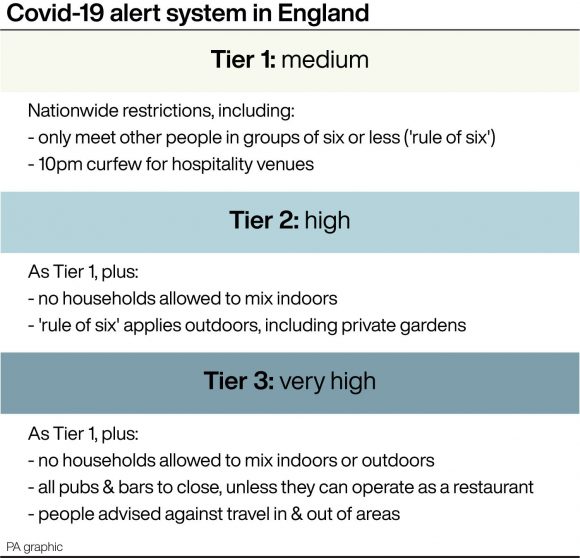 Did the tier system work?

There has been some indication that the system helped in parts of the country.

She said the government may have to think about ‘strengthening’ tiers ‘in order to get us through the winter months’. It is not yet known what thar ‘strengthening’ could look like.

Experts on the Scientific Pandemic Influenza Group on Modelling (SPI-M), which advises the government, believe infections will rise at the same rate as before if the same three-tier system is brought back in December.