Citroen has moved quickly to cut the cost of its e-C4 after the government changed the maximum price of cars included in the pug-in car grant scheme.

Last week, the government shocked the car industry with an overnight change to the scheme which reduced the maximum a car could cost to be eligible from £50k to £35k.

A government source told newspapers that it was cutting the ‘Tesla subsidy’ which was giving Model 3 buyers £3k off the UK’s most popular electric car.

At the same time, the government reduced its overall grant for each car from £3k to £2.5k. The car industry wasn’t told about the move until it was leaked to a national newspaper and the changes came in immediately.

Many car firms will now be adjusting their prices, like Citroen, to come in under the ceiling.

Citroen’s price changes will mean all variants of the electric hatchback will now qualify for the government’s plug-in car grant.

The French firm reduced the price of is top-spec e-C4 Shine Plus models by £550 meaning that the entirety of the range is eligible for the grant. 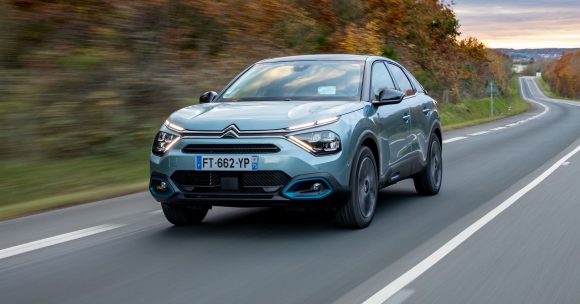 Eurig Druce, Citroën UK’s managing director, said: ‘We were disappointed to hear the news that the support for consumers to make the switch to a low emission vehicle had been reduced.

‘For this period of transition to be a success and for electrification targets to be met, both the industry and consumers need clearer long-term guidance and support on how we will get there.

‘That said, I am proud that Citroën UK’s policy of ‘Fair Pricing’ ensures that consumers will continue to be able to benefit from the full Government Plug in Car Grant when purchasing their new ë-C4.’

Citroen also announced that retail customers purchasing an e-C4 from its online Citroen Store or via selected retailers will be able to benefit from a free five-year transferable warranty, as well as a free Pod Point 7kW home charger worth £509.

MG said on Friday that it will continue to offer buyers of its electric vehicles a £3,000 discount.

The firm pledged to make up the additional £500 until the end of the month in a critical plate change month for the motor trade.

Guy Pigounakis, MG’s commercial director, said: ‘While we welcome any news that encourages people to buy affordable electric cars, for it to come in the middle of the toughest March trading conditions ever is a blow to customers.’

Car buyers who had deals in the pipeline, but for which paperwork had not been submitted, will miss out on the grant.

SMMT chief executive Mike Hawes thinks the cut in the grant has come at the wrong time for the industry.

He said: ‘The decision to slash the plug-in car grant is the wrong move at the wrong time – in a year the industry has been badly hit by the pandemic and when the UK hosts COP26.

‘It sends a confusing message to the consumer, especially private customers, and to an industry challenged to meet the government’s ambition to be a world leader in the transition to zero emission mobility.’

Hawes said the grants were making new battery technology ‘more affordable’ and thinks these incentives are ‘essential’ to make the vehicles more affordable for consumers.