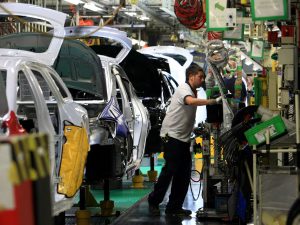 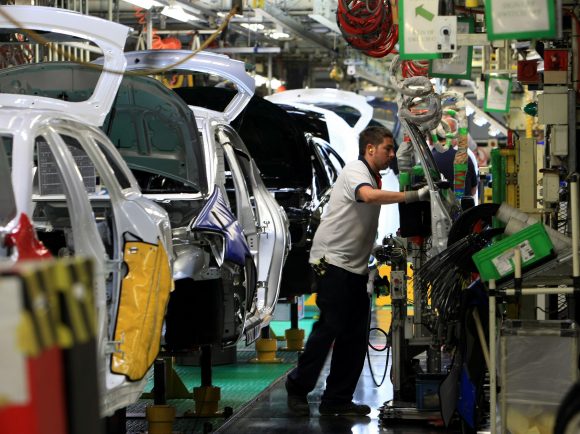 UK CAR production fell last year after a drop in domestic demand, while investment by auto companies was more than half a billion pounds lower than in 2016, new figures reveal.

Despite the decline, 1.67 million cars were built in this country – and that was still the second highest figure since the turn of the century, said the Society of Motor Manufacturers and Traders (SMMT).

Domestic demand for UK-produced new cars was down by almost 10 per cent last year amid falling economic confidence and ‘confusion’ over the Government’s policy on diesel cars, the trade body reported.

Exports fell by 1.1 per cent, but overseas demand continued to dominate production, accounting for 80 per cent of all UK car output.

The EU remained the UK’s biggest trading partner, with over half of exports heading there, while there were big increases in the numbers of cars sent to countries such as Japan (25 per cent), China (19 per cent), Canada (19 per cent) and the United States (seven per cent).

The production figure is around 130,000 below the forecast last year from the SMMT, which urged the government to give some ‘clarity’ on the transitional arrangements for Brexit.

Investment by the car industry fell by a third last year to £1.1 billion, down from £1.66 billion in 2016 and well down on the average for the past few years.

SMMT chief executive Mike Hawes said the investment fall was ‘significant’, adding: ‘A drop of that magnitude is a concern.

‘People are waiting as long as they can for increased certainty. The UK automotive industry continues to produce cars that are in strong demand across the world and it’s encouraging to see growth in many markets.

‘However, we urgently need clarity on the transitional arrangements for Brexit, arrangements which must retain all the current benefits – or else around 10 per cent of our exports could be threatened overnight.’

Andy Barratt, chairman of Ford of Britain, said the car giant had invested considerable amounts of money in its engine plants at Dagenham in Essex and Bridgend in South Wales, with both sites supplying the global market.

He predicted ‘stability’ for Bridgend, which has been at the centre of union fears of possible job cuts.

‘Our world-class car manufacturing sector is at risk – and much of the blame for this lies directly at the government’s door.’