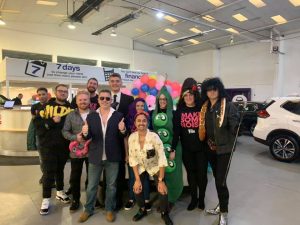 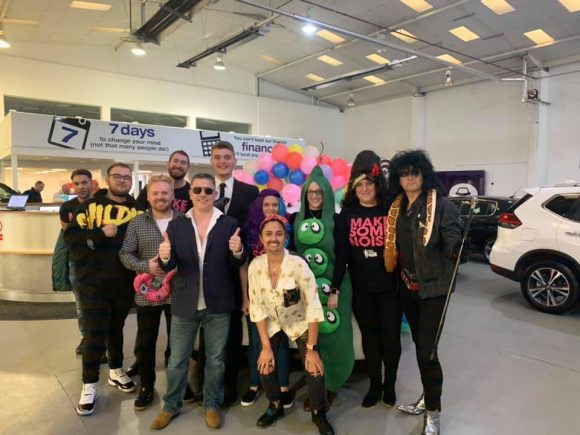 STAFF from CarShop dressed as loudly as possible to support Global’s Make Some Noise Day – with their latest charity initiative bringing the total raised by the car supermarket to more than £185,000 over three years.

CarShop’s partnership with the media company’s charity programme began in September 2016 and since then staff have taken part in a number of events, such as a cycling Tour de CarShop of all the branches, as well as the Three Peaks Challenge and Snowdon Triple Challenge, raising a total of £185,990.52.

Make Some Noise helps small charities across the UK to improve the lives of children and young people living with illness, disability or lack of opportunity, and this year, in support of Global’s Make Some Noise Day, CarShop colleagues at all nine stores dressed as ‘LOUD’ as they could and raised £2,052.

Colleagues at each site competed as a team for the title of Best Store, with Cardiff’s winning for their outfits and efforts on the day.

Ben Scholes, content and communications manager at CarShop, said: ‘We’re so proud of our colleagues who got involved and made such a huge effort to fundraise for the charity. They ensured it was both wonderfully fun and hugely successful in terms of fundraising.

‘We’re so thankful for the life-changing work of Global’s Make Some Noise – it’s an honour to support the charity.’

Amy Lancaster-Smith, from Global’s Make Some Noise, said: ‘We’re so excited that CarShop joined us again this year in support of our incredible projects across the UK. We are very grateful to CarShop and their customers for their consistent support. Over the past three years, thanks to the support from CarShop, we’ve been able to continue helping so many projects across the UK, changing the lives of disadvantaged children, young people and their families.’

MORE: The Car People to be rebranded after takeover by CarShop