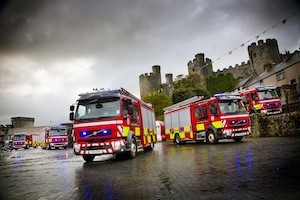 In total nine cars worth £48,000 were destroyed during the attacks. A neighbouring detached house suffered melted guttering and cracked downstairs windows.

According to This is Leicestershire, five cars on the forecourt were set on fire and paper had been stuffed into the wheel arches of the those damaged and five other cars.

Just two hours later, the arsonists moved on to Crosspoint Motor Co, on Midland Road, Ellistown, where they managed to destroy a further four cars.

Fire crews from Coalville were called out to both incidents, where they managed to stop the blazes spreading.

Manager at Start Perry Car Sales Ltd, Ricky Clark, told his local newspaper: ‘It could have been a lot worse if a neighbour had not raised the alarm.

‘It looks as if those responsible stuffed paper under the wheel arches of 10 vehicles of which five, worth a total of £18,000, were destroyed.’

He added: ‘It was good the fire services got here as quickly as they did as they prevented the fire spreading to the house next door.

‘We have not had a fire before, but we are always suffering vandalism from people with airguns smashing windscreens to people kicking cars or throwing bricks.’

Crosspoint Motor Co director, Tony King, said: ‘We had four cars, worth £30,000, destroyed in the attack.

‘It is a big shock to us as we have been here 10 years and never had anything like this happen before.

‘The four cars that were damaged were on the forecourt.’

A police spokesman added: ‘Two men aged 22 and 31 have been arrested in connection with two incidents where cars have been set alight.’

The two men arrested are still in custody.