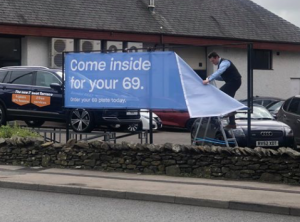 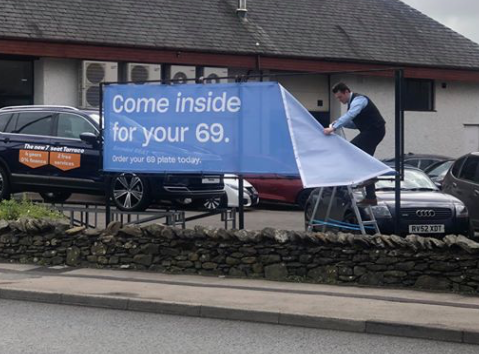 A CAR dealership was forced to remove a cheeky sign promoting its 69-plate offers after a complaint was made to the business.

Kendal Seat in Cumbria erected a banner that read ‘Come inside for your 69’ in anticipation of the new number plate being launched on September 1.

On August 28, it announced the news on Facebook, saying ‘Oh look, our new banners are up!’

But the following day, the dealership posted an image of the sign being removed. Referring to the complaint received, it said: ‘The boring brigade have been out in force – down she comes.’

Dealership marketing manager Kerry Hatton said the sign was ‘a bit of fun’ and that no offence had been intended.

Kerry told the Daily Mail: ‘Most people seemed to think it was funny but we did get one complaint. The decision was then made to take it down to prevent any further offence being caused.’

Facebook users sprang to the dealership’s defence. David Irving wrote: ‘Pat on the back for whoever came up with this cracking idea’ while Carla Louise Tallents added: ‘It’s a great tongue-in-cheek marketing campaign.’