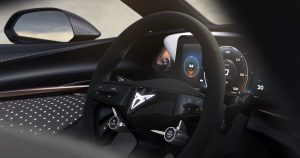 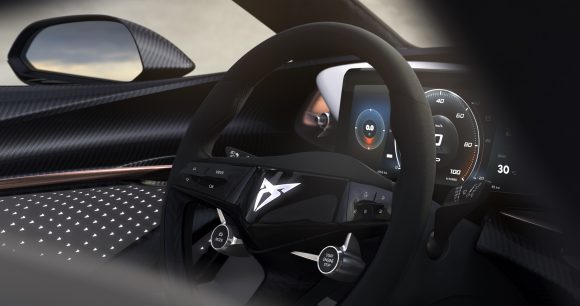 CUPRA has offered a first look at its upcoming Concept’s interior ahead of a full reveal at next month’s Frankfurt Motor Show.

Set to be a preview of the Seat spin-off’s first EV, the Cupra Concept utilises an interior layout that is driver-focused while still ‘offering comfort for all occupants’.

In this image, a steering wheel that utilises touch-sensitive controls is on display, with a large screen containing key driving information on show behind it. Patterned upholstery is flanked by a bronzed trim element, with bare carbon fibre on display too

Cupra says ‘dynamic approaches to technology and design’ result in an interior that’s premium and low in weight. Though we’ve yet to see the exterior of the car, the firm says the sculpted interior reflects the designs of the car — so we can expect something quite angular.

The Cupra Concept will be revealed at the upcoming Frankfurt Motor Show, taking place from September 12 to 22.

Though production of an EV has yet to be officially confirmed, Cupra will be using electrification as a key element of its product range going forward. The upcoming Formentor coupe-SUV will utilise a plug-in powertrain, as will the next high-performance Leon hatchback.