The Chrysler brand may not survive the new PSA-FCA merger and could be axed, a new report has suggested.

Despite its illustrious history and place in American car culture, Chrysler could be ripe for the chop due to poor sales.

According to Associated Press, current Groupe PSA CEO Carlos Tavares is likely to follow a template that he successfully adopted to turn around the fortunes of Groupe PSA.

That template included keeping a close eye on costs and being ruthless on deleting models or ventures that didn’t make good financial sense.

Groupe PSA and FCA – Fiat Chrysler Automobiles – are all set to merge in a $50bn deal that’s due to be completed by March.

Tavares is expected to oversee the supergroup, which will bring together 14 brands including Peugeot, Citroen, Opel, Vauxhall, Fiat, Alfa Romeo, Lancia, Jeep and Chrysler, to create a new company called Stellantis.

Once created, Stellantis will become the fourth largest car maker in the world.

Shareholders are expected to meet today to vote on the deal.

Although not created just yet, the company has already said current FCA boss Mike Manley will head up Stellantis in the Americas.

However, despite earlier reports suggesting the 14 brands will remain intact, Chrysler’s future may be in doubt.

Once a powerhouse in America, Chrysler now only has three models in its line-up – the ageing 300 saloon and Pacifica and Voyager MPVs.

The American brand even had a footprint in the UK until 2015 with a range of American and rebadged Lancia models, but was pulled from the British market due to poor sales.

Five years on, Chrysler is still suffering – October 2020 saw sales down by 19 per cent.

Because of this, Chrysler may not survive the merger and could be dropped from the supergroup’s portfolio of brands believe analysts.

FCA has said there are no plans to close any plants, while PSA says it hasn’t announced any future plans and ‘will communicate in due course’.

A key focus of the merger will see many brands share technologies such as platforms and engines to cut costs and drive efficiencies.

PSA Peugeot technology, for example, is likely to be rolled out to the North American brands in the FCA family.

‘You can’t be cost efficient if you keep the entire scale of both companies,’ Karl Brauer, executive analyst for the iSeeCars.com auto website, told Associated Press.

‘We’ve seen this show before, and we’re going to see it again where they economise these platforms across continents, across multiple markets.’ 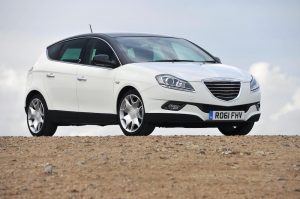 Chrysler introduced the Delta to the UK in 2011 as part of a brand relaunch. It was effectively a rebadged Lancia Delta and survived until 2014. A year later the Chrysler name was axed in the UK.

Along with looking at the future of brands in the merger, Tavares is expected to take a keen interest in consolidating models, particularly in Europe.

FCA’s Italian factories are running at below capacity, according to reports, and the merger will see a whole swathe of brands effectively competing against each other.

‘We are at a crossroads,’ Michele De Palma of the FIOM CGIL metalworkers’ union told Associated Press.

The merger will also engineering centres in Paris (PSA), Turin (FCA) and Rodelsheim (Opel) now part of the same group, which in turn could be unprofitable.

Maserati and Alfa Romeo will be key priorities for Stellantis, as well as rolling out more hybrid and electric models and keeping the Jeep and Ram brands profitable in the US.