Home > News > Citroen WILL bring Ami to the UK after receiving 12,000 expressions of interest from potential British buyers

Citroen WILL bring Ami to the UK after receiving 12,000 expressions of interest from potential British buyers

Citroen has decided it will bring its quirky Ami to the UK after all.

Initially only for Europe, the pure-electric Ami is actually a quadricylce in the same vein as Renault’s Twizy.

But due to ‘unprecedented demand’, the French firm has u-turned and decided the car will cross the channel to Britain after receiving more than 12,000 expressions of interest from potential British buyers.

Citroen UK marked the news by releasing images of the car decked out in the Union Flag.

Citroen will make a few changes to the Ami to make it suitable for UK roads, such as adjusting the headlights and replacing the continental-style plug with a three-pin and a Type 2 connector allowing drivers to charge the Ami from a home wallbox or at on-street public charging point.

The steering wheel will remain on the left, but due to the car’s tiny size Citroen says this shouldn’t be a problem to drivers as it allows them to exit the vehicle at the kerbside in busy city centres.

Announcing the news, Citroen said: ‘Due to unprecedented customer demand, Citroen is pleased to announce that Citroen Ami will launch in the UK during spring 2022.’

I’m absolutely delighted to announce that #CitroënAMI is coming to our shores! This is all down to the thousands of hand-raisers who registered their interest through the @CitroenUK website and all over our social media, so thank you. Coming spring 2022. 👉https://t.co/LA9TGYPUen pic.twitter.com/clbyYOQgMg

The statement went on to say: ‘Since making its debut in 2020, Citroen Ami has been turning heads around the world – not least here in the UK.

‘Much to the delight of a large and growing number of UK customers, the Citroen brand is now able to announce that the zero-emissions Ami will officially launch here in the spring of 2022.’ 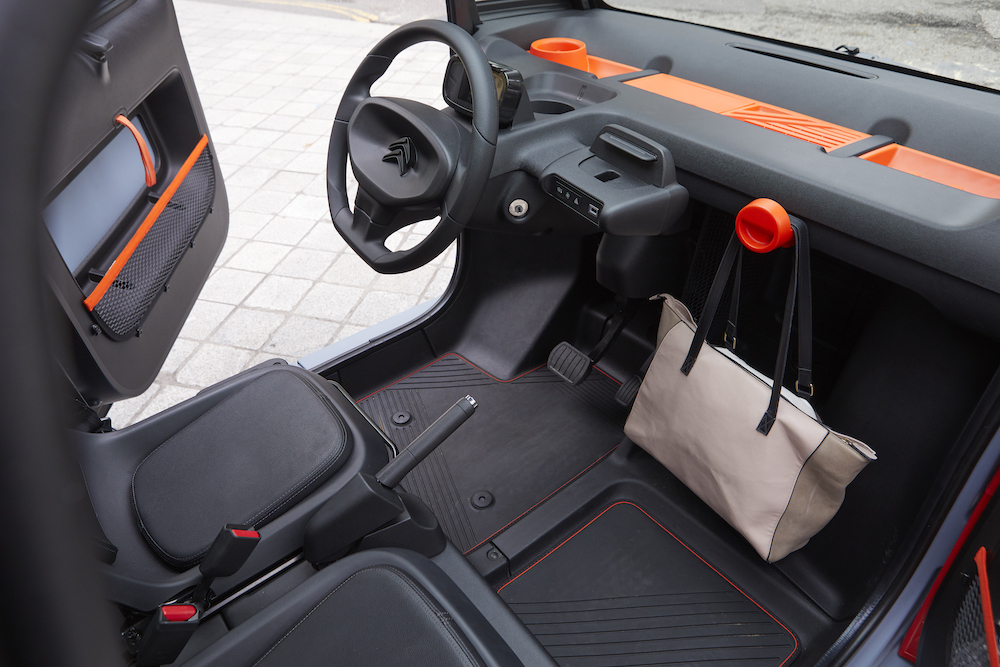 With the changes Citroen has to make to the Ami to make it suitable for UK roads, a starting price of around £6,000 would be likely rising to nearly £8,000 for the top spec car. There’s even the option of the Cargo van being sold here, too.

Order books are open today (Sep 22) for the 12,000 buyers who registered interest earlier this year, with these people asked to hand over a £250 refundable deposit to reserve their place.

From Monday, September 27, order books will open to all customers, and UK deliveries are expected in the Spring.

The Ami only weighs 485kg thanks to lightweight body panels, and inside there’s seating for two. There’s no infotainment screen, just a phone holder, and luxuries consist of a heater and a large glass roof.

It’s powered by an 8bhp electric motor that’s fed by a 5.5kWh battery giving a total range of 46 miles, and the top speed is just shy of 30mph. A full charge takes three hours.

Earlier this year, Car Dealer took the Ami on a road trip and visited Citroen dealers to gauge interest. You can watch what the dealers had to say in our video at the top of this story.