Home > Road Tests > Will dealers get the chance to sell Citroen Ami? We explain and take 2021’s quirkiest EV for a drive

Will dealers get the chance to sell Citroen Ami? We explain and take 2021’s quirkiest EV for a drive

Citroen dealers will be making space for more electric models in their showrooms in 2021.

The French firm has just launched the e-SpaceTourer MPV and the e-Dispatch van, while UK deliveries of the all-electric new e-C4 begin early in the new year. All three join the C5 plug-in hybrid SUV that kickstarted Citroen’s electric onslaught earlier in 2020.

However, one electric car that Citroen dealers are all waiting with baited breath for is the Ami. It’s not actually a car but a quadricycle (more on this later) and Citroen is undecided on whether to bring it to the UK.

In France there are various ways for people to get behind to wheel – from 14-year olds to learn crucial road skills before driving a normal car, busy people wanting to zip across Paris and who don’t want to use public transport, to elderly people wanting cheap transport on a long-term lease, Citroen calls the Ami ‘accessible to all’. 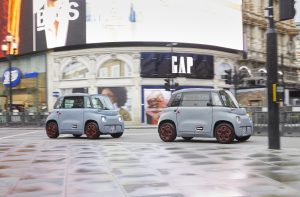 To establish exactly how much interest there would be in the Ami, Citroen has added a sign-up form on its website. Only then will Citroen make a decision on whether it’s worth bringing the Ami across the English Channel.

The initial signs are good, however. The Ami fits perfectly into Citroen’s recent steps to take itself back to its routes of providing comfortable and affordable transport for the masses, and Citroen knows that if it brought the Ami to big, contested and polluted cities like London, it could wrap up a market that’s about to take off – and that’s smart transport for all.

If the Ami does come to UK, it’ll remain left-hand drive with the only modification being the integrated plug being changed to a UK-friendly three-pin one, and the starting age to drive one being 16 years old.

It’s likely Citroen will have a two-prong roll-out. Dealers would offer the Ami on super-cheap leases with urban customers being offers different user plans – an Ami for the week and perhaps an e-C4 for out-of-town trips at the weekend, for instance. 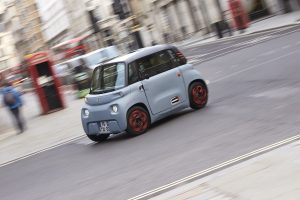 Citroen’s main focus, however, will probably be on car sharing schemes. Large cities like London could see
huddles of Amis parked up at the side of the street available for hire, with people able to get behind the wheel via a smartphone app. Think of the Ami as a safer and warmer Boris Bike.

While that could come a reality, for now the Ami is a just a oddity on UK roads that looks bizarre against a landscape of overweight SUVs.

Pedestrians point and stare at the Citroen Ami. Some laugh, some in amazement while others are bursting with questions on how they can buy one.

Looking like a child’s Wendy house on wheels, the Ami is simply constructed. It’s a quadricycle so it can bypass stringent safety laws and legislation, therefore costs are kept low and convenience prioritised, and its it’s simply a metal frame with tough, prang-proof plastic panels attached to it. 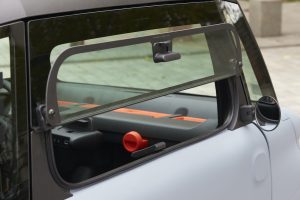 The panels are all symmetrical, too, with the front and rear and the doors being identical. Because of this the driver’s door opens in a Rolls-Royce ‘suicide’ style, while the passenger’s opens conventionally. It means that the panels are cheap to replace and dealers can easily swap them in minutes allowing the Ami to get back on the road and be earning money quickly again.

The interior is also made from plastic with clever hooks and a large storage space for a bag, and the passenger’s seat is fixed. In terms of controls there are just buttons for the hazard lights, heated rear screen and front fan, and a USB charging port. The windows make a neat nod to that other Citroen that was great at mobilising the masses – the 2CV.

The plug lives behind the passenger’s door and is on an extendable cable. It takes three hours to charge up the tiny 5.5kWh battery, giving a range of 47 miles. 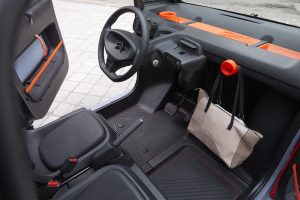 While its big rival, the Renault Twizy, can hold its own on suburban roads, the Ami is purely for congested city streets. Top speed is just 30mph but it whizzes up to around 20mph very quickly, and the car feels surprisingly solid with a heaviness to the handling and the steering is nicely direct. That is until you hit a speed hump and the Ami clatters over it – the suspension merely feels like it’s keeping the car held together.

Does the Ami have a place in the UK? Absolutely. Citroen dealers may have a tough job at shifting the Ami but as a rentable, hop-in-hop-out way of driving through town, it makes a great deal of sense. With zero emissions it won’t contribute to inner-city CO2 levels, while its compact size means it won’t take up much space. Particularly in the rain-soaked UK, the Ami will provide a great way of getting from A to B without getting wet.