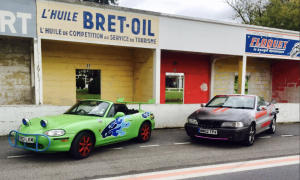 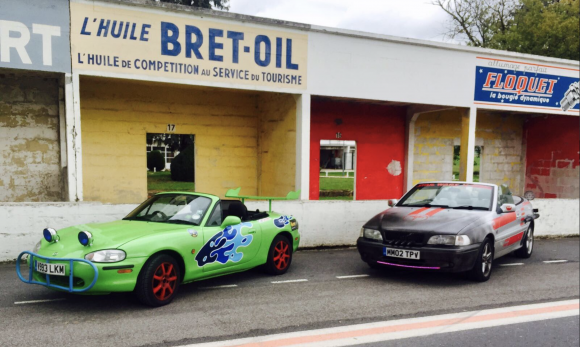 THE Bangers4Ben teams had been treated to some fantastic roads on day three, but after a final night of partying and awards an easy drive was needed.

The route to Calais was around 385 miles and would take about 5 hours, but with our ferry set to board at 5.30 there would be loads of time, surely?

We all started the day with the traditional team photos, before making our own ways to the border. Some needed to get away early, while others were less worried about rushing back to England, work and reality.

Being out of Switzerland and in France also meant we were back in toll road country. However, that did give us some opportunities to work out which of our bangers were faster off the line.

It was definitely ours.

One popular stop on the route back is Reims – known for its champagne, good food and famous grand prix circuit. Because it’s a public road, teams were able to take advantage of some posing or even race starts in some cases.

From then on it became a race to get on our ferry. After a stop off for some traditional French food in a restaurant called ‘Memphis’ we realised how far behind we were and needed to pick up our pace – or at least reduce our number of stops…

The Fire Fighters, Judge and Lawyer are on route with no mechanical issues to report …but not sure we're going to make the ferry #B4B17 pic.twitter.com/JnH1UaXszH

Eventually, all of the teams were safely over the water and back in England though! It gave a much needed opportunity to catch up on all of the stories of the day before having to go our separate ways for the last time.

The car that refused to die got us home. Five days of great memories, new friends made, unbelievable roads and scenery #bangerbuddies #b4b17 pic.twitter.com/zSwmQN8MKc

Some teams had a lot further to go than others, but we can confirm that they’ve all made it home now.

260 mile left for us still. Roof down pic.twitter.com/EJYq5orTHi