Home > News > Day three of #B4B17: Davos to Stelvio, then back to Strasbourg! 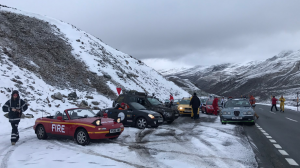 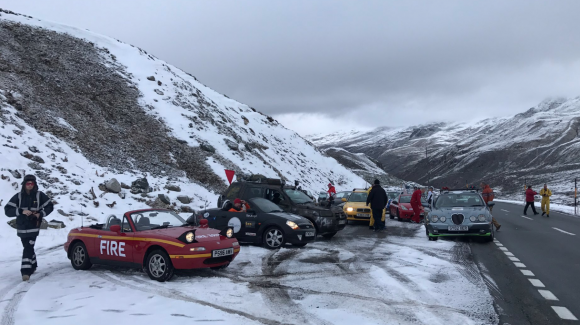 Day three of #B4B17: Davos to Stelvio, then back to Strasbourg!

DAY three of Bangers4Ben was the ultimate driving day, for most teams at least.

We're on our way to Stelvio and we've finally found some snow! #B4B17 pic.twitter.com/N7HHIpV2GH

The weather was kind and while our day started cold in at the tops of mountains, as we dropped down we were finally able to enjoy some clear skies – something sorely appreciated in the MX-Fire.

For some, the day didn’t start quite to plan, with Promotive needing to call on the help of the AA in the morning.

The hills are alive with the sound of profanities #B4b17 pic.twitter.com/bHDVK9m8ac

Everyone was most excited about taking on the famous Stelvio pass but before that we had to take on Umbrail, a series of tight and twisty corners through green scenery. Once we’d successfully made it up the incline, we had the drop down the otherside and the landscape changed from lush to sparse.

We continued on and the temperature dropped as we climbed up to the stop of the Stelvio Pass before pausing to take in the view. It was here that we had our first casualty of the day, when Lawgistics’ coolant pipe popped off – clearly it was too excited about the road ahead.

There the Car Dealer support team were waiting and we were told others had already flown by and were heading onto the next stop. Once the Lawgistics’ StreetKa had cooled down we began our decent.

The drive on from there should have taken us in a loop back to Switzerland, but our convoy ended up taking a detour, while others enjoyed the sites in the area and some headed north to enjoy a lunch in Austria.

Our detour took us into the depths of the Italian countryside for some beautiful sights in the sunshine, but far away from where we should have been. Our convoy were amazing though, and persisted through a return journey back into Switzerland.

However, the never ending journey back into France was made slightly sweeter by a trip on a car train through the mountains. However, while we’ve been messing around on some of the best roads in Europe for the past three days, others have been editing away to produce mementos of the trip.

…while most of the teams woke up to this hilarious video from iVendi of their journey – featuring the other teams!

In typical iVendi tradition, here is the video you need to watch… https://t.co/RAJCsU04oN Donate here: https://t.co/a5ZZdRF21c#b4b17

As we chomped through the miles across Switzerland, dreaming of a cold beer back at the hotel, we managed to pick up a few stragglers! A satisfying reward, that reassured us we weren’t too far behind.

However, as leaders of the pack we had a lot of faith put in us by our fellow teams but, at a literal fork-in-the-road, there was a dispute and the iVendi team led the pack away from us. We were adamant that our sat-nav was correct and so were they, while some stuck in the middle decided to persue their own path.

This, in true Bangers4Ben style, became a fight to the end as every team tried to prove that their way was the best. Some went on motorways, some through a rural detour, while teams took the last leg through France, others went on the German autobahns. Although, in the end we all arrived within about three minutes of each other…

We’re in our own race against the sun, once its gone it’s game over for us, our lights are worse than @LawgisticsSales navigating! #B4B17 pic.twitter.com/3AQBdgSIY8