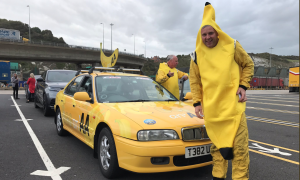 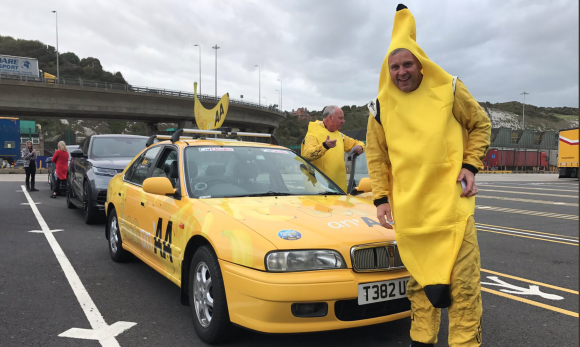 Day one of #B4B17: Dover to Illkirch, France

OUR Bangers4Ben teams set off on the annual pilgrimage to drive some of the greatest roads in Europe today, travelling more than 400 miles in their charity cars.

This year 48 teams have found themselves a suitable banger, all in the name of raising money for the charity Ben, and set their sat-navs for the Alpine roads of Switzerland. The rules state you can spend no more than £750 on your car, which inevitably causes some problems!

All checked in on the ferry and on the way to Calais. Seen some quality cars so far! #B4B17 pic.twitter.com/OEtruROyrz

The morning was a success as all of the cars made it safely onto the ferry at Dover. There were some issues along the way, but fortunately nothing more than some lost lights and minor run ins with the fuzz…

Although a few teams had issues getting their bangers going to Dover, once there the cars began to cause a big stir with other travellers.

There have been plenty of impressive modifications made this year, including a Mad Max car by Geoff Cox Derby, James Bond’s Lotus made by Promotive, a Ben-na-AA (pictured top) and even a Volvo Tank, both by the AA.

However, Plan Insurance really took its car alterations to a whole new level this year by driving what is essentially a chalet on wheels. These special aerodynamic modifications did mean the route took the team slightly longer though…

This ferry is not SNOW bad! On route in support of @Bangers4BEN ⛴ #B4B17 #skipuns – not had one funny look or second glance pic.twitter.com/chN4Zgbdgb

The Car Dealer teams this year include myself and Jon Reay in the MX-Fire and Andy Entwistle in an Italian Job Mini that channels Michael Caine through a very loud megaphone. Plus our support team, Amanda Philp and Mal Hay, have been racing ahead of the pack in a non-banger Kia Sorento.

So far, things have been going well for our MX-5 fire engine. Our only real issue has been a pop-up headlight that stopped popping. It was soon fixed by removing our siren unfortunately, as the wires of which had manage to twist around and break the light mechanism.

Today’s drive was a long haul across France to Illkirch, near Strasbourg, but he tomorrow the real fun begins as the teams head into Switzerland. Here the twisty mountain roads begin, which will put our drivers skills to the test!