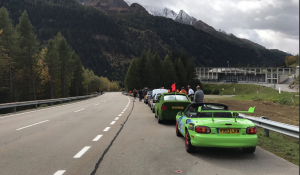 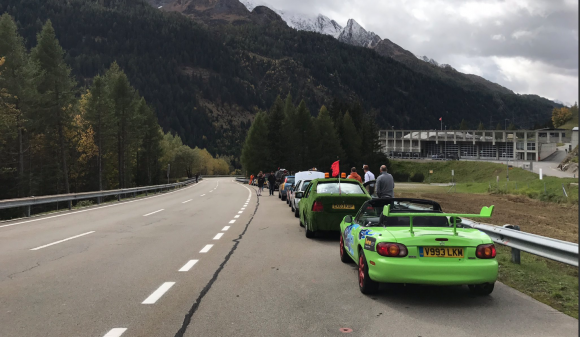 IT’S day two of Bangers4Ben’s Alpine adventure and those inevitable breakouts after the mountain passes – or before them in some cases – have been coming in thick and fast.

We attempted two of these: one successfully and one not so successfully… The Furka Pass was our first challenge of the day, and most teams were out of the hotel bright and early to head into Switzerland.

Before even attempting the snowy pass though, Team Promotive in the James Bond car began overheating. Fortunately, it wasn’t long before they were back on the road and still ahead of the pack!

The Car Dealer support team had ploughed on ahead to investigate rumours that the Furka was closed and it seemed to be true.

However, the Sportif BMW Z3, Blackhorse Safety Car, Lookers’ Almera Tino and the Auto Trader Cheese Saab ploughed on up the mountain as far as they could before being met with an impassible barrier.

Very quick pitstop after turning round from the Furka pass #b4b17 pic.twitter.com/Mp21ezNpHr

The Car Dealer MX-Fire had somehow been given responsibility for a large convoy of bangers and Jon Reay did a marvellous job of navigating us around some dire motorway traffic through Switzerland.

The cars have made it into Switzerland! #B4B17 pic.twitter.com/HQrrP99MrD

We’d just got up the side of the mountain and through three sets of roadwork traffic lights when we heard there was no way of getting to the top so turned around, although we were greeted with some not-too-pleased faces when the sat nav wanted us to turn around again and go back up…

Now on the Gotthard Pass after a failed attempt to get on the Furka 😔 #B4B17 pic.twitter.com/w2bPaUW482

Through the cold weather and drizzle, we powered on to the San Bernardino Pass where all of a sudden the clouds cleared and we were greeted with baking sunshine. Further up the pass, things got chillier again, but we were rewarded with some absolutely stunning views and incredible roads that made it worth our shivers!

Amazing views from the top of the San Bernardino pass. #B4B17 pic.twitter.com/4mYNurwogL

We were reunited with those who had made it halfway up the Furka Pass here. Team Blackhorse’s Mercedes had gone into limp mode but was helped back on the road and the Z3 had little brakes left after its mountain decent.

Plan Insurance’s Chalet car had gone quiet though… It appeared they’d had overheating issues earlier in the day – possibly due to the ‘snow’ covering the bonnet. Fortunately the AA were on the scene and the chalet made it on to a car train… which was going the wrong way.

Although one car didn’t make the climb, Team GardX’s did, and while there have also been a few teams in traditional Swiss outfits today, none was as spot on as these!

However, it was Piers in the Italian Job Mini who was channelling his inner milkmaid. The car’s megaphone had been repurposed to play moo-ing sounds, which the team discovered would attract calves from nearby fields!

Meanwhile, the Mad Max-Geoff Cox car was ploughing along well until it lost one wheel nut from both of its mammoth rear wheels. The team were cautious but continued, making it successfully up San Bernardino. On the way down, though, we were held up by a police check and the Freelander caught their attention. A lot of decorations lighter plus a big fine later and they managed to escape!

So, the police just made use remove the skulls and bull bars from mad max 1, limping back like a castrated dog, get the beer ready! #B4B17 pic.twitter.com/0UA9vSrL4T