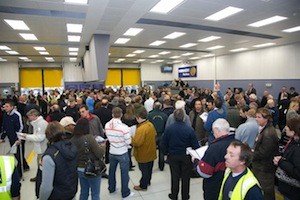 AVERAGE values of dealer part-exchange vehicles rose towards the end of 2013, reports Manheim.

Average values fell month-on-month for eight of the 10 segments, most notably for large family models, which saw prices fall from £2,703 to £2,390 between November and December. However, coupe models appreciated in value from £4,744 to £5,141 over the same period.

Daren Wiseman, valuation services manager at Manheim Auctions, said: ‘December’s figures show a surprisingly strong used car market, especially when compared to the tough times still being seen on many high streets. Clearly, dealers have learnt their lessons well in the past couple of years and have become much more selective about which models they remarket via auction, which means that prices are remaining strong.’

Wiseman added: ‘Our latest Market Analysis figures show that, despite sluggish growth in other parts of the retail sector, 2013 has been a good year for a large number of dealers. While consumer confidence in some markets remains fragile, the data suggests that new car sales are robust and that dealers are achieving good prices for their part-ex vehicles.

‘Looking ahead to 2014, the first six weeks of the year have historically been the busiest, with demand outweighing supply. Already prices are looking strong and trade has started off briskly as we expected. The challenge facing dealers in 2014 is to ensure that they continue to achieve best value for all their part-ex vehicles, not just the best vehicles on the forecourt.

‘The secret to success will therefore be even tighter control of the ‘when, where and how’ of remarketing; When is the best time to put a car into auction? Where would be the best location to sell a particular model? And what is the most appropriate remarketing channel; physical auction, online auction, consumer retail or dealer-to-dealer portal? If dealers get this right, then 2014 should again be a good year for motor retail.’