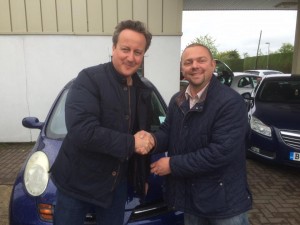 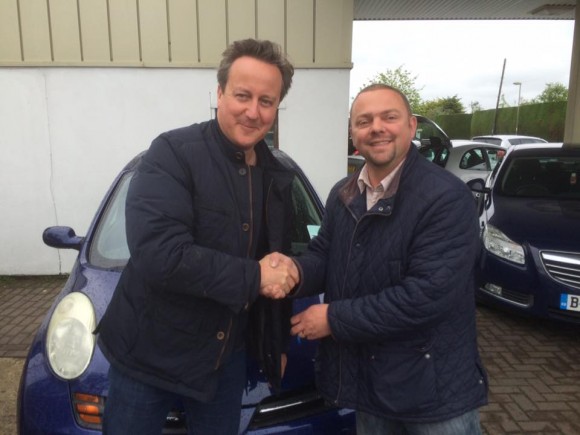 PRIME Minister David Cameron ignored more expensive offerings while buying a car for his wife Samantha at the weekend from an Oxfordshire dealership – opting for a £1,495 Nissan Micra.

Iain Harris, the owner of Witney Used Car Centre in Minster Lovell, was asked by the Camerons’ security team to stay open half an hour later on Friday night so that the premier could check over the used car.

At first, Harris thought the phone call was a joke from his friends, telling The Guardian: ‘I thought, well I’ll just stay here in case, because the security guard said they’d arrive at 17:32 and I thought, well, that’s a bit precise.

‘Next thing I know, Mr Cameron and his security guards turned up, and I thought, this is actually happening.’

Harris added: ‘He looked it over just like any bloke off the street, but not someone with mechanical knowledge.

‘I think he must have seen it on the internet, a British-made car, five-door hatchback, not too expensive, within 10 miles of his constituency. And he found this one.’

Cameron returned to buy the car – blue, of course, and with 92,000 miles on the clock – the next morning, paying the full price displayed on the ticket. Harris said that he then taxed the car at a local post office and took the car away.

‘I think his security team thought it was odd I was just treating him like a normal customer,’ said Harris. ‘But it’s not like he was buying a £20,000 car, then it might have been different.’

MORE: Here’s how to get a ticket for CDX16