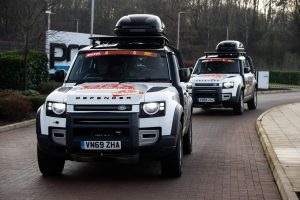 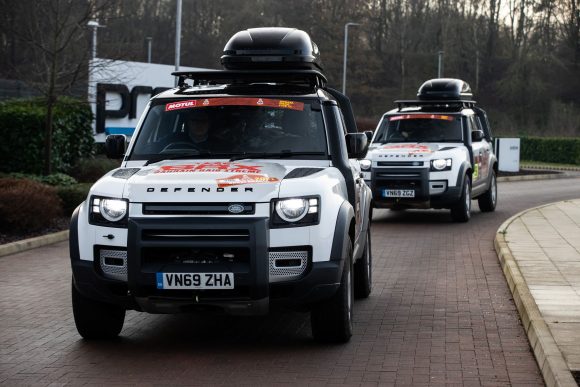 More areas of England could be put into Tier 4 from Boxing Day while a mass testing programme was due to get under way to alleviate congestion at the border between France and the UK.

Reports suggested ministers would meet today to decide whether more parts of the country would be put under the toughest restrictions amid fears over the spread of a new mutant strain of coronavirus.

It came as France lifted its travel ban and allowed journeys from the UK to resume, but said those seeking to travel must have a negative coronavirus test result. Birmingham looks likely to enter Tier 4 while many lower tiers could be moved to Tier 3.

Covid-19 tests for lorry drivers will lead to border delays

Imposing a coronavirus testing regime on lorry drivers crossing the English Channel ‘still means delays at the border’ and that UK supply chains will be hit, according to the Road Haulage Association.

Transport Secretary Grant Shapps said rapid lateral flow tests – which can give results in about 30 minutes – will be used to test HGV drivers at the ports in a deal to reopen the border between France and the UK.

The French authorities will be carrying out similar testing on hauliers entering the UK in a programme that is set to get under way today. The RHA estimates between 8,000 and 10,000 delayed lorries are now in Kent and its surrounding areas. 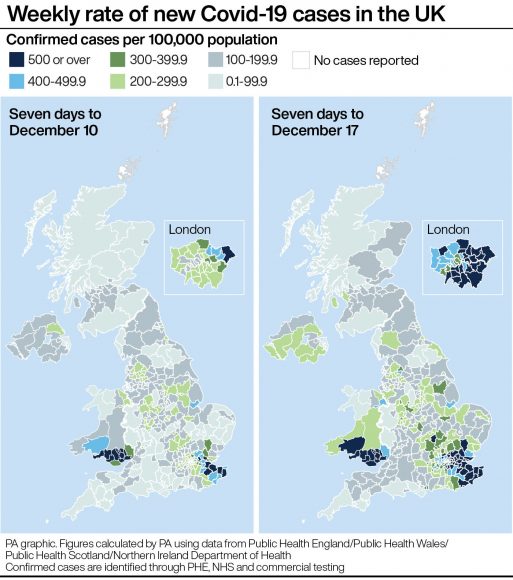 NHS leaders have called on the Prime Minister to extend the Brexit transition period by a month, as it warns that no-deal could risk the health of patients during the Covid-19 crisis.

Faced with an alarming rise in Covid-19 infections, they say that a month delay will take the NHS out of ‘the immediate danger zone, and it will enable the NHS to continue to focus on fighting the pandemic without having to contend with disruptive changes brought about by a no-deal outcome’.

Talks are continuing today as EU chief negotiator Michel Barnier said there is a ‘final push’ to reach a post-Brexit trade deal before December 31.

Shadow business secretary Ed Miliband said nearly 175,000 operations in London and southern and eastern England had been instructed to close by the announcement of new lockdown measures.

Miliband accused Business Secretary Alok Sharma of being ‘asleep at the wheel’. The ex-Labour leader said a ‘hospitality and high street fightback fund’ was needed.

Markets had been spooked by the new Covid-19 strain and no sign of a trade deal signed between the UK and EU on Monday.

But by the end of yesterday, investors steadied their nerves as stock markets rebounded despite no sign of a deal and borders remaining shut.

UK house sales up by nearly a fifth in November

The number of homes sold in November was nearly a fifth higher than in the same month a year earlier, according to HMRC.

There have been signs of buyers rushing to beat a stamp duty holiday deadline.

Motorists have been warned to watch out for extortionate APR on car insurance as it’s revealed paying monthly could cost almost £500 more than if paid in one lump sum.

Research from flexible insurance provider Cuvva found that a young person insuring a Ford Fiesta could face paying an extra £500 if they spread payments over 12 months.

Data showed the average lump sum cost of this insurance would be £3,975.19, while opting to pay monthly would see that rise to £4,431.50. In its research, which looked at some of the UK’s best-known insurance companies, Endsleigh had the highest APR of 39 per cent.

A pair of Land Rover Defenders will be making an appearance as support vehicles for the Bahrain Raid Xtreme team as it competes in the gruelling 2021 Dakar Rally.

The two Defender 110 models will be used to support the team as it races through the 4,751-mile event in Saudi Arabia next month, carrying vital supplies, crew and equipment over desert dunes, mud and through the harshest of conditions.

Today there will be blustery rain for much of England and Wales with some strong gusts along exposed Irish Sea coastlines, says the BBC. It will be drier and brighter for Scotland and N Ireland, but colder.

Tonight, northerly air will push showers into Northern Ireland, eastern Britain and northern Scotland. There will be frost developing under clear skies further north and rain in the south for a time.

Christmas Eve will be a chilly day with fresh northerly breezes, but bright for many with lots of sunshine. Some wintry showers are likely along eastern coasts at times. Becoming cloudy in the north.