Does the colour of your car make it more prone to prangs? 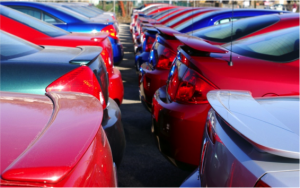 DO you consider yourself a careful driver? And even if you do, do you find scratches and scrapes appearing on your car?

Well, what if we told you that certain car colours are more likely to get into bumps than others?

Some may argue the more popular the car colour, the more likely the need for a repair. But what if it’s more than that?

Previously, the more superstitious among us suspected green cars had the most accidents, but according to ChipsAway – the UK’s leading brand in minor automotive paintwork repairs – there may well be a new colour to watch out for!

Have you fallen victim to a high-maintenance car colour selection?! Here are the top five colours ChipsAway repair the most:

Not such a popular colour as in the 80s and 90s, but dare we say it – making a comeback? Either way, if you drive a red car you make up nine per cent of all ChipsAway repairs each year, so congratulations for keeping yourselves off the top spot and respectably in fifth position.

Grey is the third-most popular car colour in the UK at the moment, with 14 per cent of the total number of cars registered in the UK last year being this colour. This seems to suit ChipsAway’s data too, as exactly the same amount, 14 per cent of repairs, are on grey cars. The colour of sensible car drivers, maybe?

While blue cars have decreased in popularity over recent years – with only 13 per cent of new-car registrations in 2014 – they still get into their fair share of bumps, and account for 18 per cent of total repairs.

At number two, it’s the ‘always in fashion’ black car with 21 per cent of total repairs. A few years ago, black cars were reportedly most likely to be involved in collisions as they are harder to see than other more brightly-coloured cars, particularly during evening hours. Well, according to ChipsAway’s findings, they are pipped to the post by…

Silver-coloured cars make it into the loving hands of ChipsAway repair specialists more so than any other colour, earning them the top spot, with 24 per cent of repairs. Or you could think of it another way – perhaps the owners of silver-coloured cars just care about them more and so want to keep them looking shiny and new!

At the other end of the spectrum, and perhaps surprisingly so considering they saw the highest number of new-car registrations last year at 22.2 per cent, are white cars. Maybe white car drivers are a more cautious bunch, as they account for just seven per cent of ChipsAway’s repairs.

MORE: Issue 89 is ready to be downloaded to your iPad now

Motors.co.uk dealers speed their way to sales in June

What do buyers look for in their new car? Here’s the top 10 reasons to buy…