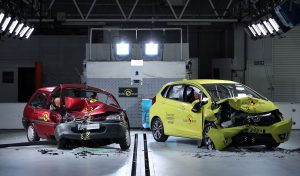 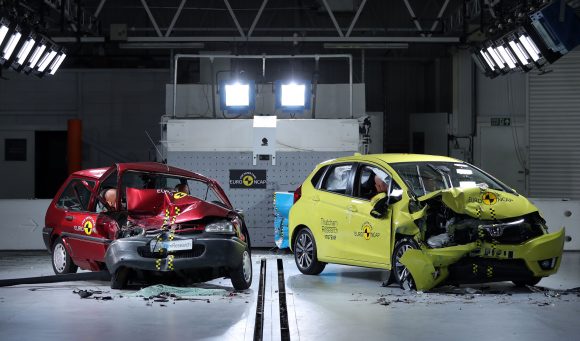 THATCHAM Research has marked the 20th anniversary of Euro NCAP with a crash test to highlight the dramatic effect 20 years of independent safety testing has had on small cars.

The tests were introduced in February 1997 and exposed hidden dangers in top-selling family cars, forcing a fundamental rethink in the way vehicles were designed to prevent injuries and save lives.

The first tests revealed such frailties in the era’s small cars that one, the Rover 100, was withdrawn from sale altogether as a result.

To underline the differences between 1997’s cars and 2017’s, the Rover 100 was crash-tested again in a repeat of the original test, before a current Honda Jazz, Euro NCAP’s benchmark small family car, was subjected to the same test – an offset front-end collision at 40mph.

As expected, the Jazz performed well in the collision, with the safety cell experiencing minimal flex as the crash structures absorbed the impact. The restraint systems – seatbelts and airbags – limited the load on the occupants, resulting in a collision that all occupants could easily walk away from. A head injury criteria (HIC) score of 448 for the driver is less than half the 1,000-point injury threshold.

By comparison, the Rover 100’s occupants would have suffered life-threatening injuries. The crash forced the steering wheel sharply into the cabin, pushing the airbag to one side, forcing the dummy driver’s head to miss it completely and hit the instrument panel. The force on the head registered a shocking 3,000 on the HIC scale.

The bulkhead – separating the engine from the passenger compartment – also collapsed and the driver’s seat gave way, leaving the dummy driver with what would have been severe injuries to his legs as they were rammed hard into the dashboard, registering forces 10 times higher than what Thatcham Research considers to be a reasonable score. One of two dummy children in the back seat of the Rover also suffered what would have been life-threatening injuries, as the crash hurled the replica three-year-old forward, ramming its head into metal pillars supporting the head restraint and the driver’s head.

Matthew Avery, director of research at Thatcham, said: ‘The Honda’s sophisticated body structure collapsed at the front, absorbing the 40mph impact, spreading the force around the car, but leaving the vital safety cage intact. Unlike the Rover 100’s occupant compartment, which caved in by 400mm, the Honda’s barely distorted, deforming by just a few millimetres – well within acceptable levels. This enabled the car’s restraint systems – its belts and airbags – to perform at their optimum level.

‘Wherever you were sitting in the Rover 100 it was bad news. In a head-on crash at 40mph, you definitely do not walk away and you have a very high likelihood that you are no longer with us.

‘These crashes demonstrate how incredibly far we have come in 20 years and show why we have seen a 63 per cent reduction in car-occupant deaths and injuries since 1997, when Euro NCAP began.’

Michiel van Ratingen, Euro NCAP’s secretary general, said: ‘As we mark 20 years at the forefront of road safety, we are very proud that Euro NCAP’s programme of safety tests has achieved major, life-saving improvements in cars and has helped Europe reach the lowest road fatality rate for any region in the world.

‘Euro NCAP has given millions of consumers the knowledge and confidence to choose the safest cars possible. Recent years have shown a slowdown in the progress rate, however, so we mustn’t take our foot off the gas. We want to ensure that Europe’s roads get even safer in the next 20 years – not just for car occupants but for all participants in traffic.

‘We already test many more aspects of a car’s safety than we did when we started in 1997, and that’s set to continue. Next year, we will test systems that recognise and avoid crashes with cyclists, and we’re lining up a very challenging road map for 2020 to 2025.’

New tests will be added to the Euro NCAP regimen in 2018 to address lane control, pedestrian night-time safety, junction crashes and cyclist protection.

MORE: More to discover than ever before on the Car Dealer Live Stage at CDX17