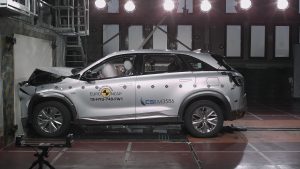 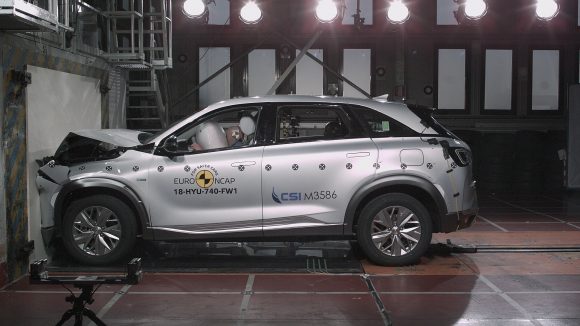 The electrically driven SUV, which is powered by a fuel cell stack, was awarded the maximum five stars for safety. It included impressive scores of 94 per cent for adult occupants and 87 per cent for child occupants. 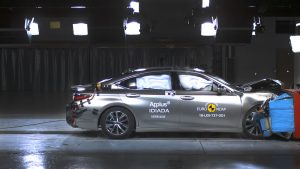 A Lexus ES is crash-tested

Hydrogen is stored in a pressurised tank, and the gas itself has an extremely low ignition point, which has led to concerns about its safety for vehicle use. However, the Nexo’s five-star rating should dispel these fears and reassure buyers that they’re a world away from a Hindenburg-style explosion – 36 people were killed when the German passenger airship caught fire and crashed while trying to dock in New Jersey in 1937. 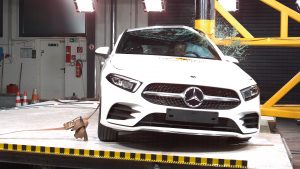 Michiel van Ratingen, secretary general of Euro NCAP, said: ‘This is a satisfying set of solid test results, and we are pleased that cars continue to perform well in the AEB [autonomous emergency braking] tests, including for pedestrians and cyclists.

‘The fuel cell Nexo and hybrid ES point the way for future powertrains, and Euro NCAP will work to ensure that safety performance as well as energy efficiency remains at the top of the manufacturers’ agenda.’ 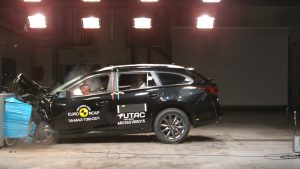 A Mazda 6 meets a barrier head-on

Euro NCAP’s UK testing partner is Thatcham Research, and its director of research, Matthew Avery, said: ‘With the Nexo, Hyundai has successfully demonstrated that alternatively fuelled vehicles need not pose a risk to car safety.’

Also tested were the mechanically identical Peugeot Rifter, Citroen Berlingo and Vauxhall Combo. They share platforms, safety kit and engines, and are built in the same factory by the French PSA Group. Unsurprisingly, the three cars posted scores of 91 per cent, 81 per cent, 58 per cent and 68 per cent across the four categories of adult occupant, child occupant, vulnerable road users and safety assist.

Pictured at top: A Hyundai Nexo experiences a full-width impact at Euro NCAP