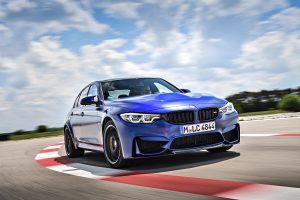 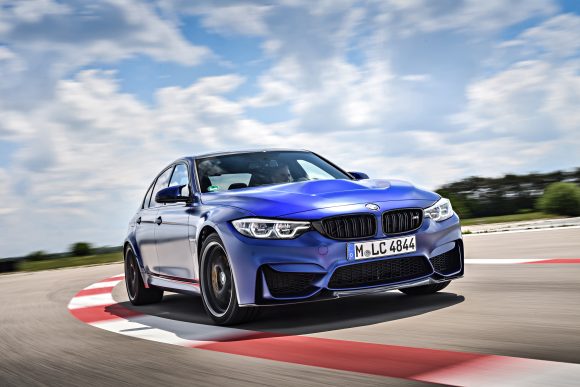 Meet BMW’s latest lightweight hero – the M3 CS. After a strict greens-only diet from a motorsport-inspired engineering division, the M3 has managed to shed 30kg of flab and gain some intoxicating driving characteristics in the process.

Buoyed by a sales surge that saw 80,000 M cars find homes in 2017, BMW is working hard to increase its performance division’s portfolio and this is the latest to hit showrooms. Limited in numbers to just 1,200 units worldwide and 100 of those in the UK, BMW says it’s already nearly sold out.

In an attempt to shave those all-important kilos, BMW fitted new forged alloy wheels and replaced heavy panels, such as the roof and bonnet, with carbon-fibre-reinforced plastic. The front seats have been thrown out in favour of new weight-saving replacements, while even the centre console has been stripped back and lightened.

BMW fans might be wondering why the CS  is missing an ‘L’ in its name – made famous  most recently by the E46 M3 CSL. Well,  according to BMW’s M boss, although the diet  for the CS was extensive, it wasn’t quite enough  to justify the ‘Lightweight’ tag that comes with  a CSL nameplate. But don’t let that put you off – this is still one very special machine indeed.

BMW has worked its magic to extract more horses from the already-impressive 3.0-litre twin turbo unit. Power is up 10bhp to 460bhp while torque increases nine per cent over the 550Nm in an M3 Competition  Package to 600Nm.

That extra oomph and trim waistline means the CS will hit 60mph in just 3.9 seconds – enough to furrow the brows of many a supercar owner. Engineers have even ditched the speed limiter, so German autobahns can be navigated at speeds of up to 173mph. And believe us, thanks to a Munich-based test drive, we can confirm the Germans weren’t joking. As if that were a thing…

Cautious drivers can expect to see returns of 33.2mpg, although it’s unlikely many CS buyers will be cautious types. In reality, you’ll be languishing in the teens if you use it as its creators intended.

On road or track, the CS is astonishing. Revving to a heady 7,600rpm, the engine is awash with power, accompanied by a noise that sends shivers down your spine like a first love.

The Michelin Pilot Sport Cup 2 tyres are super-sticky, and on a hot, dry track – like that which we were blessed to lay black lines across in Germany – serve only to compose the BMW like a ballerina balanced perfectly on her toes.

The way the CS sheds speed, thanks to huge carbon ceramic brakes, is a close match for a direct impact with a tree, while the seven-speed DCT automatic gearbox is a delight, rocketing through gears faster than an Aldi assistant firing a week’s shopping down the checkout.

In some driver settings (of which there are many) the steering does lack feel but it’s not awful, and we’d like the seats to be a little more comfortable and easier to adjust.

Inside, an optional BMW M Performance Alcantara steering wheel with 12 o’clock marker is a must-buy. It’s simply wonderful to hold and adds to the CS’s drama. The usual BMW smattering of technology can be found too – including the much-improved new iDrive system with connected information services, such as traffic and weather updates, and an impressive Harman Kardon stereo.

Car Magazine said: ‘The BMW M3 CS is a truly exciting car to drive, capable of thrilling its driver more convincingly than the regular M3’, while Autocar said: ‘The CS metes out ruthless performance with clinical control. It’s questionable value for money but a stellar drivers’ car, and a fitting finale for the F80 M3.’

BMW’s M division really is on a winning streak and the CS proves it. Just weeks after it unleashed the new M5 on the world we get another hit  with this – a future classic in the making, if you can afford the near-£90k price tag.

With a raucous turn of speed, soundtrack to worry a hip hop chart topper and driving experience that few cars could even come close to delivering, the M3 CS is surely set to become yet another Munich legend.