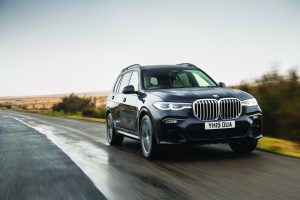 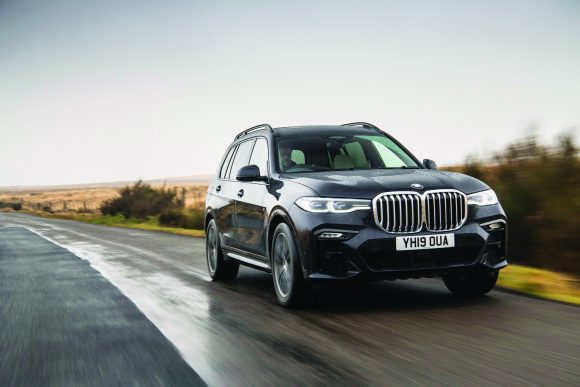 BMW has long been an established contender in the SUV market. Since the X5 debuted in 1999, it’s gone on to become one of the most recognisable faces in the premium large car segment which has gone on to spawn a series of niche-busting X cars. There is one part of the SUV market it has been notably absent from, however – and that’s the very top end of it. Until now.

Now, BMW is keen to point out this isn’t just a bigger X5 — think more a 7 Series that can also cover the muddy stuff if need be.

That it can do, in no small part thanks its standard all-wheel-drive system, but this is first and foremost a luxury cruiser — as well as the first seven-seater SUV from BMW. Plus, being just over five metres long, two metres wide and 1.8m tall, it’s comfortably the biggest car the brand has ever marketed.

From launch, two diesels and a petrol are on offer for the BMW X7, and it’s the latter we’ve got behind the wheel of. It’s the firm’s tried-and-tested ‘40i’ offering — a 3.0-litre, turbocharged straight-six engine.

It produces 335bhp and 450Nm of torque, delivered to all four wheels via an eight-speed automatic gearbox. The result is 0-60mph in 5.9 seconds, with a top speed of 152mph possible. As for efficiency, BMW says it’ll manage 24.6-24.8mpg on the combined WLTP cycle, with emissions weighing in at 198g/km.

It’s a unit that’s remarkably smooth in smaller cars – and that remains the case here.

The X7 does a remarkable job of hiding its weight. It offers a more involving drive than its key rival in the Range Rover, and certainly feels more agile in all scenarios too.

It’s when covering motorway miles the X7 really shines, though. With a supple ride, and a near enough silent and very comfortable cabin, it makes the prospect of a multi-100-mile journey quite pleasing – although we’d opt for the 30d in that scenario so less time is spent at the pump.

We’ll be honest, the styling of the BMW X7 is something of an acquired taste. Up front, there’s the unmissable – and most divisive – huge front grille, flanked by thin LED headlights, while taking the long walk around to the rear reveals a taillight assembly that almost mimics that of the 7 Series saloon.

When forking out £70k+ out for a luxury SUV, you’d expect a plush cabin, right? Well, that’s certainly the case with the X7. It’s emblazoned in leather and real wood trimming, with supremely comfortable seats and bags of room for all seven occupants. Yep, that third row is actually liveable with – even for a full-sized adult.

The thing with the interior, though, is that it’s still missing that sense of occasion that the Range Rover delivers.

There’s also a plethora of safety and assistance gear thrown in like cruise control, autonomous emergency braking, BMW’s Parking Assistant Plus package and rain-sensing wipers. Buyers could comfortably knock the price of the car into the £100k ballpark with a generous ticking of the options list but it offers a respectable amount of kit at a price that means it undercuts the Range Rover.

Autocar said: ‘It’s far from the most elegant or imaginatively designed BMW and it’s really too big for many British roads (and car parks).’ The Sun said: ‘Someone needs to tell the person who designed the X7 grille that size doesn’t matter.’

BMW knows how to build a good and proper SUV, and it’s showcased that in the X7. It’s presented a genuine Range Rover alternative that undercuts its British rival just enough on price to be noteworthy, while presenting a more engaging driving experience and some actual off-road ability too. That said, there’s a desire for a bit more flair from the X7 and its looks are not what most people would describe as ‘elegant’.