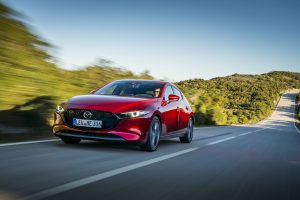 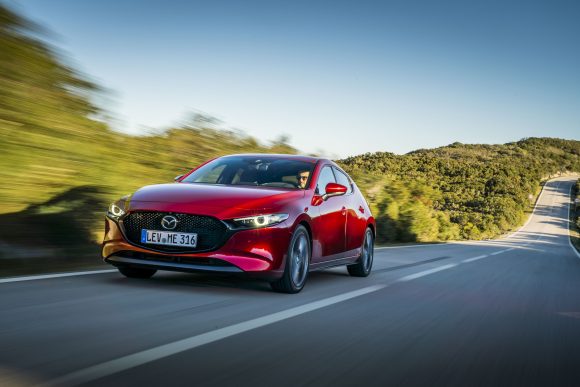 Competition is so hot, Mazda has struggled to get a decent foothold in the C-segment. Despite the 3 being a pleasant prospect in its previous three generations, it’s not exactly a common sight on our roads. Now though, the fourth-generation car is here – and the Japanese firm is hoping it will change that.

What we have here is a totally new car. It’s the first to sit on Mazda’s latest Skyactiv-Vehicle underpinnings, which are said to improve comfort, handling and refinement. There’s also a fresh take on its ‘Kodo’ corporate design.

Key to the Mazda3’s potential success is the all-new Skyactiv-X technology, which the manufacturer claims can deliver the efficiency and torque of a diesel with cleaner petrol engines. It’s not quite ready for market yet though, so we’ll have to wait until later in the year to give our verdict on that.

While we wait to see if Skyactiv-X lives up to the hype, two Skyactiv engines are available from launch for the 3 hatchback — one naturally aspirated 2.0-litre petrol and one 1.8-litre turbodiesel. The green-pump option also comes as part of a mild-hybrid powertrain.

It’s the former of those we had a go in. Developing 120bhp and 213Nm of torque, power is sent to the front wheels via a six-speed manual gearbox (an automatic is also available). As a result, 0-60mph comes in a not-so-brisk 10.2 seconds, with a 122mph top speed possible.

Mazda claims it can also achieve 44.8mpg on the combined cycle – although we managed 47.8mpg on our mixed test route – along with 142g/km of CO2 emissions. As the figures may suggest, this isn’t a powerhouse – in fact, it’s fair to call it slow. However, it does offer a smooth drive that turbocharged rivals struggle to deliver – just be prepared to work it hard in more demanding driving scenarios.

The Mazda3 has always had an impressive behind-the-wheel experience, ranking among the class best as a driving machine. That’s no different here, with well-judged steering combining with a composed chassis to provide some serious fun – it’s almost crying out for a more potent engine.

In a nutshell: jaw-dropping. Mazda has the good-looking car formula nailed down with its ‘Kodo’ design, and the 3 is a continuation of that.
Its concept-car-like front makes any other car in this price bracket on the road look ancient in comparison.

The Mazda3 makes a convincing effort at seeming more upmarket inside than it actually is. High-quality materials are present throughout – particularly on high-spec GT Sport models onwards, which benefit from a full black leather interior – and the three-piece dash is particularly effective at creating an elegant look.

Mazda likes to be generous with its equipment offerings, and the 3 is no exception. As standard across the range, the hatch boasts a head-up display, adaptive cruise control with traffic sign recognition, LED headlights and a newly designed infotainment system displayed on an 8.8-inch display. The infotainment system in particular is a highlight, building on Mazda’s already intuitive software and giving it a more modern feel.

Top Gear described the new 3 as ‘an easy, good-natured, undemanding car to live with’. Sunday Times Driving said: ‘If it were at school, the 2019 Mazda3 would probably collect the end-of-year award for the most improved pupil.’

Buyers in the C-segment have unfairly overlooked the Mazda3 in the past, but the latest version of the car may be the one to turn their heads at last.