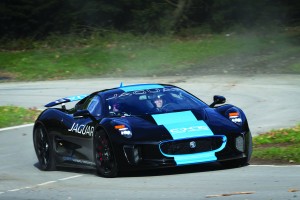 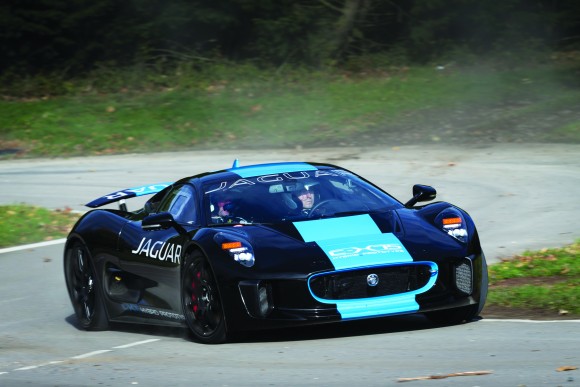 IT’S the noise that hits you first. For a hybrid supercar running in pure electric mode the C-X75 makes a meaty growl. In a world of silent EVs, the Jaguar is purposefully noisy – humming, breathing even, with a bassy beat as it ‘ticks over’. engineers made the roof vibrate to create the artificial sound, amplifying a Tron style soundtrack through the car’s speakers.

The soundtrack is matched to throttle position, increasing in tone and intensity as you accelerate. In electric mode the car produces 400bhp – and on the JLR test track, with a Williams test driver behind the wheel, it’s impressively rapid.

The artificial sound adds to the drama and it pulls strongly, corners flatly and generates intense grip.

Back in the pits, we swap cars. This time Mike Cross – Jaguar’s chief test driver – is behind the wheel. Cross is the man tasked with making Jags feel like Jags. He’s what Walter Rohrl is to Porsche, to the Big Cat. He takes me for a full-blooded high-speed lap of the circuit, even power sliding around a closed roundabout.

JLR has a four-lane high-speed bowl at Gaydon and, as Cross buries the throttle on the slip road, the air is sucked from my lungs. The sound and feel is much like a highly tuned superbike – think Suzuki Hayabusa on acid. With a rev limiter at 10,500rpm the tiny 1.6-litre engine screams towards the higher reaches of its song with ferocious intensity, pinning you into the bucket seats.

On the straight we climb through the seven- speed paddle box and I watch the needle rise – 156mph, 174mph, 187mph and yet still it climbs. As Cross clicks into seventh, I can see the end of the straight but we’re still accelerating. The C-X75 eventually tops out at 198mph, or so I thought. I later learn that the prototype has a standard Jaguar digital speedo incapable of clicking over 200mph – the real top speed was 205mph.

I only notice how fast we’re going when Cross stamps on the brakes. We’re slowing for a good few seconds but I look across to see we’re still travelling at 110mph – and about to turn a corner.

My time behind the wheel is a nervous experience. On my first lap the savage gear changes and drama of the whole event wash over me. I know this is a special moment but I find it hard to let it sink in. Then Cross shouts at me: ‘You need to really push it, power it right up the rev range.’

So I do just that. On the same straight we’d just topped 200mph, I let rip. In third, fourth and fifth I quickly crash into the red line. The acceleration is immense; it’s like nothing I’ve experienced before on four wheels – this Jaguar is superbike fast. I hit 187mph before chickening out and plunging the long travel brake pedal into the floor.

My time in this special Jaguar is short but it’s long enough to leave a memory that will remain imprinted on my mind for a lifetime.

The inside story of Jaguar’s C-X75