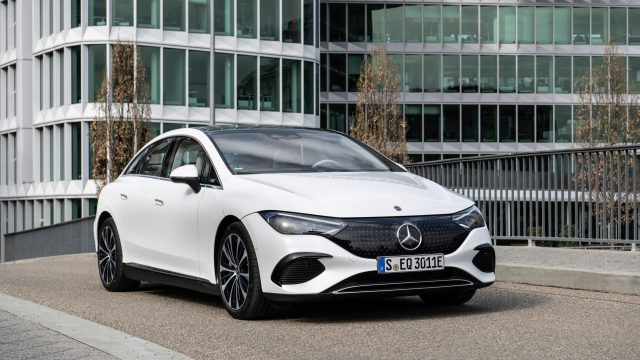 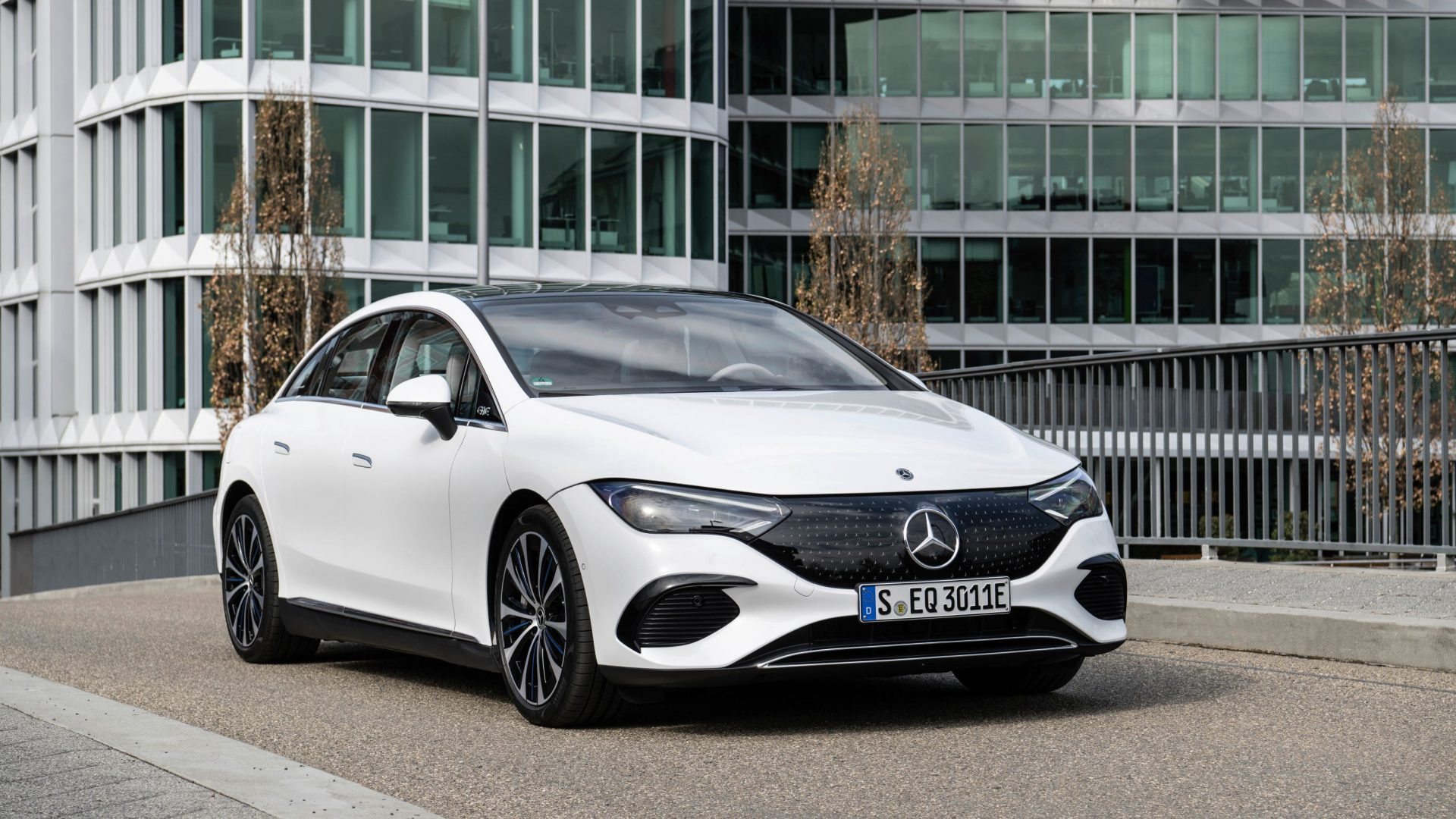 Meet Mercedes-Benz’s first fully electric car in the executive car class – but it’s rather more than just a new model destined for the company car driver.

The German giant launched its EQS luxury saloon last year, and in the same way that technology in the S-Class limo trickles down to lesser models, the EQE packs a lot of the EQS’s features but in a smaller package.

We’re among the first in the UK to see if Mercedes has built a new winner in the electric executive car class.

At first glance, the EQE looks awfully similar to the EQS – a car that’s Mercedes-Benz’s electric halo model. There’s a reason for that, as the EQE is essentially a downsized version of the EQS in many ways.

It’s built on the same ‘EVA2’ platform as the EQS, and in contrast to other EQ models, the EQE and EQS are Mercedes-Benz’s first proper electric cars.

While Mercedes does offer a full range of EQ models from the EQA small SUV right up to the EQV electric people-carrier, those models started out in life as petrol and diesel-powered. The EQS and EQE, however, were designed to be electric from day one.

Although the EQS features a large 107.8kWh battery, the EQE makes do with a 90kWh pack that sits between the car’s axles.

For the time being, the only EQE available to buy in the UK is the 350+ which uses a 282bhp electric motor mounted at the rear of the car.

The EQE 350+ gives an excellent blend of power and efficiency with 0-60mph taking 6.4 seconds and a claimed pure-electric range of between 356 and 394 miles on a full charge, depending on spec and wheel size.

It comes with a 22kW on-board charger and can take a maximum DC rapid charge of 170kW – rivals such as the Audi e-tron GT offer faster charging, but the EQE can still manage a 10 to 80 per cent charge in around 30 minutes.

A full charge from a home wallbox such as an 11kW unit will take just under eight and a half hours.

In time, Mercedes will launch a less powerful but more efficient 300+, while a pair of Mercedes-AMG models will bring four-wheel-drive and power outputs of up to 677bhp. 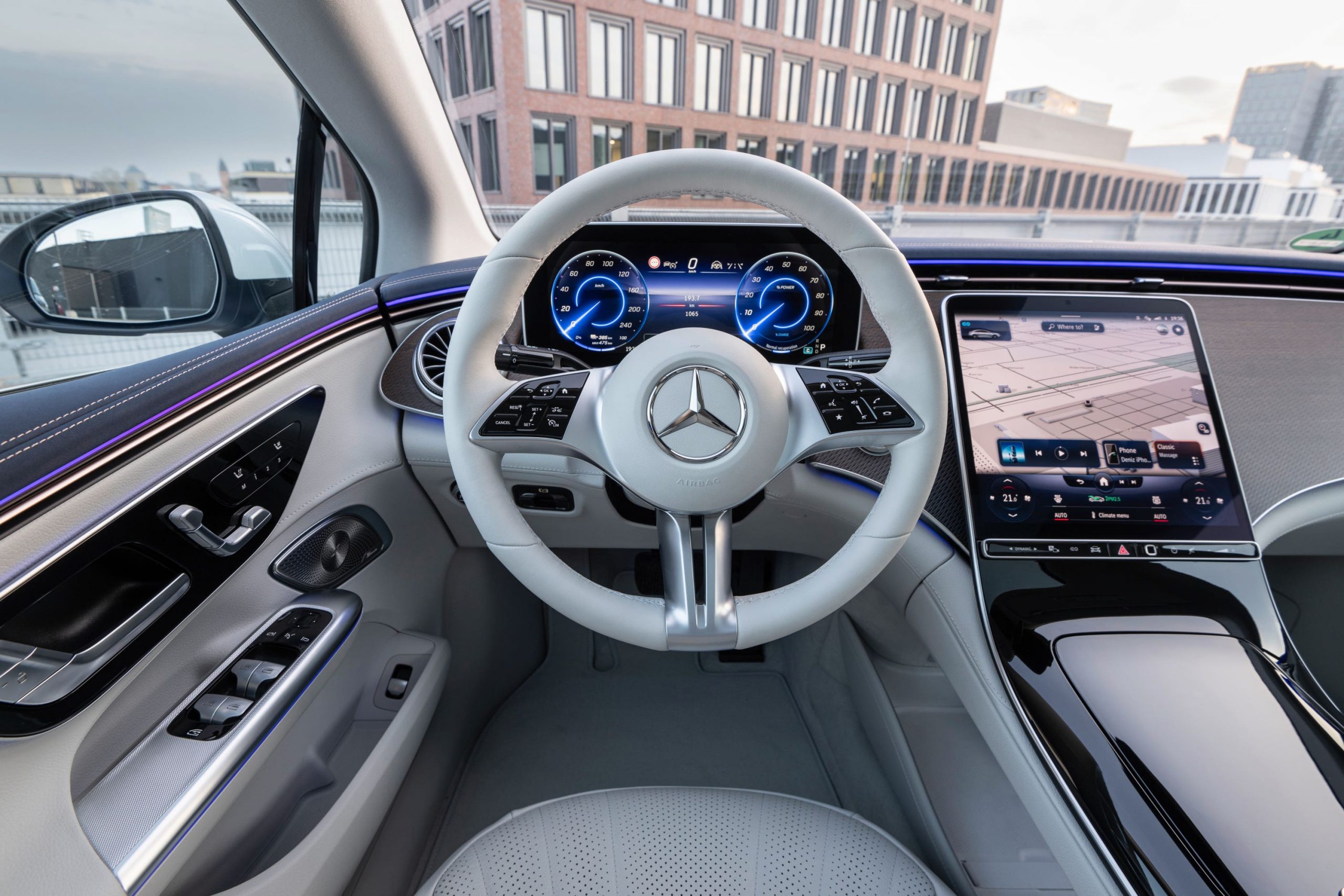 With the EQE, the name of the game is refinement. Prod the throttle and the EQE glides forward in a surprisingly undramatic fashion – it doesn’t pin the driver in their seat like a BMW i40 M50, Porsche Taycan or Tesla Model S, for example.

Once on the move, the EQE delivers a similarly luxurious driving experience to the EQS.

There are almost eerie levels of silence with barely any wind noise, even at motorway speeds, and there’s a complete absence of whine from the electric motor. Only the roar from the 20-inch alloys and low-profile tyres interrupt the silence, and even then it’s slight.

Driving around the city is relatively stress-free, too, as the EQE features a number of brake regeneration modes, including ‘intelligent recuperation’.

In this setting, the car takes information from the sat-nav system, the cameras and the sensors, and slows the car automatically.

Our test car was fitted with air suspension (standard on the EQE’s two highest trim levels), which naturally only added to the supple ride quality.

On twistier roads and in the car’s ‘Comfort’ setting, however, the suspension was far too floaty, but ‘Sport’ firms things up nicely.

The EQE is impressively agile for such a large and heavy car and the steering is surprisingly sharp, but the EQE is ultimately a very luxurious cruiser.

It’s in the styling department where the EQE really does look like a scaled-down EQS, but despite this, we reckon if the three-pointed star badge were covered, most people would be hard-pressed to recognise it as a Mercedes-Benz.

There are short front and rear overhangs and the whole body has a very ‘cab-forward’ look, emphasising the amount of space inside. Meanwhile, at the rear there’s the ubiquitous full LED light strip – a feature that seems to grace virtually every EV these days. 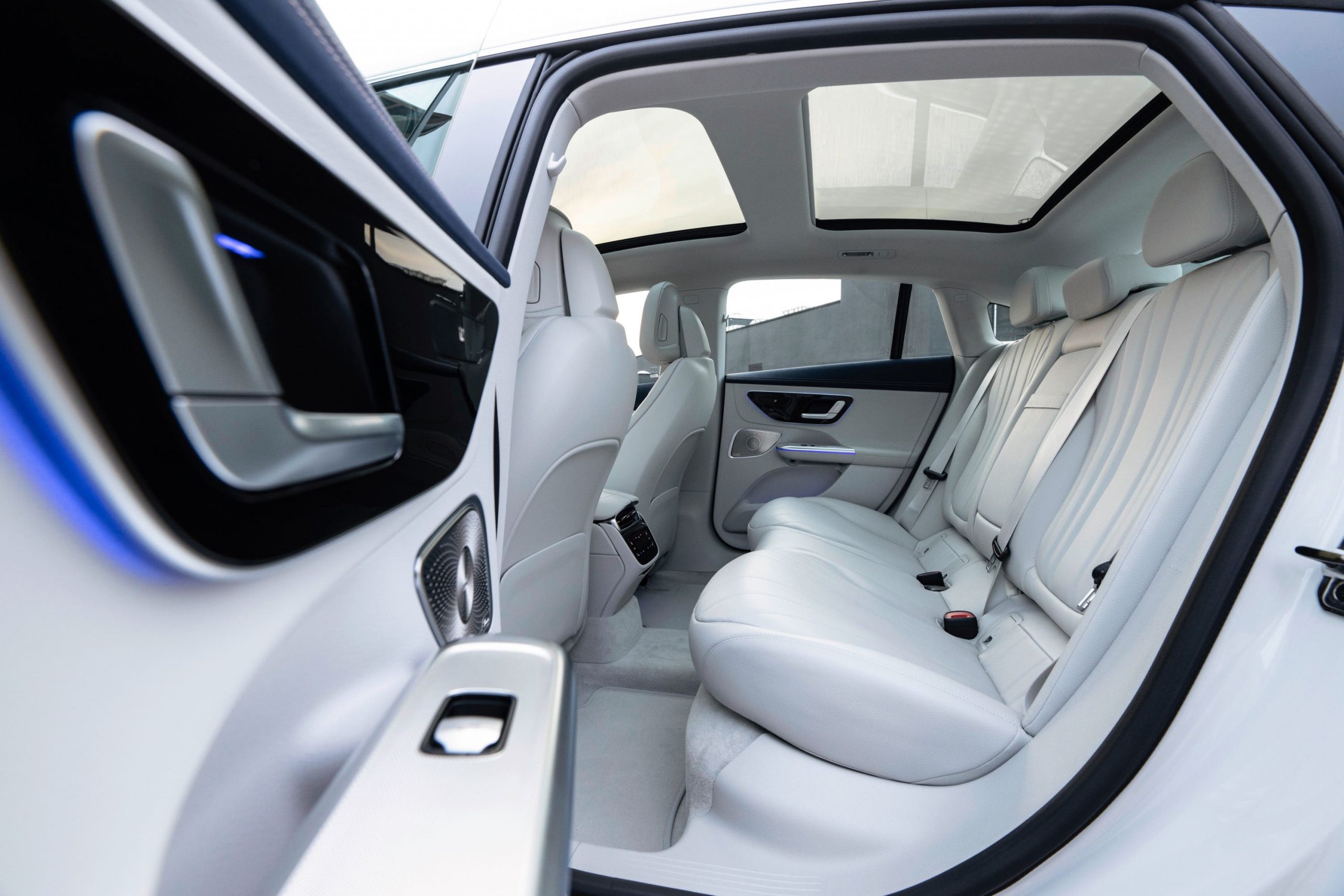 If the outside looks very EQS-esque, wait until you step inside…

The EQE’s interior is a near-carbon copy of the range-topping electric Merc’s cabin, with a focus on plush-feeling plastics, soft leathers (on some trim levels) and real wood for the dashboard.

No matter which trim you select, the EQE comes with a 12.3-inch digital display for the dials and a 12.8-inch tablet-like screen for the infotainment system.

The EQS’s £7,995 optional ‘Hyperscreen’ – which essentially turns the entire dashboard into a single glass surface and features three screens – isn’t available from launch, although we would expect it to make an appearance at a later date.

Meanwhile, even though it’s a saloon, you sit quite high up in the EQE, and the whole cabin feels very spacious.

There are plenty of cubbies and there’s more room in the back seats than in the Mercedes-Benz E-Class.

The only surprise is the boot space: the EQE just comes as a booted saloon, and once the boot is raised there’s just 430 litres on offer, which is more C-Class-like than E-Class.

Folding rear seats add more flexibility, but for more practicality you’ll have to look at the EQE SUV, which is due in 2023. 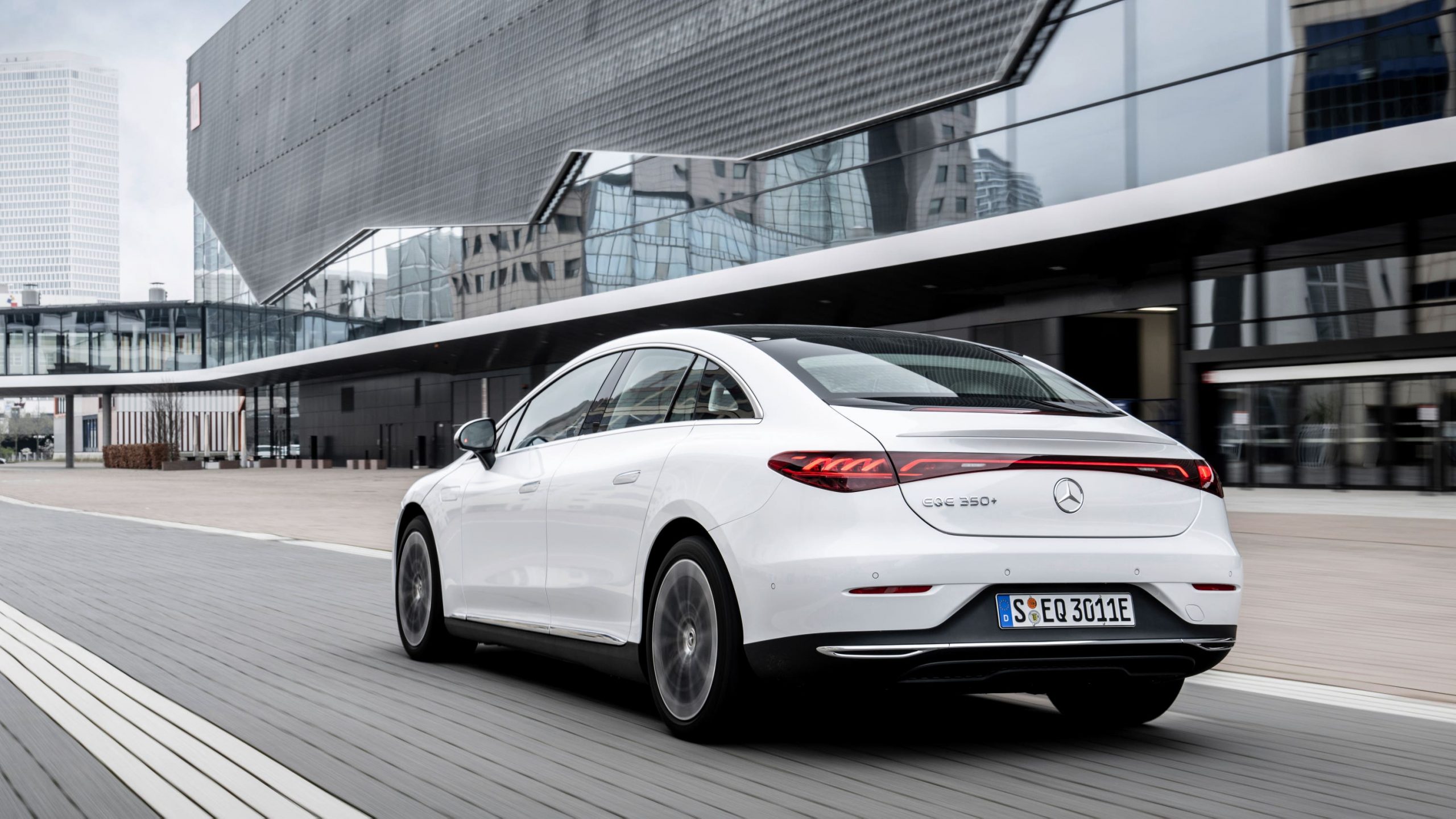 With prices starting at £76,450, the EQE certainly isn’t cheap, but rivals such as the Audi e-tron GT and Tesla Model S cost considerably more.

Naturally, the higher up the range you go, the more toys are thrown in, such as a high-end Burmester stereo system, Digital Light (each headlamp cluster has one million pixels to give visibility of up to 650 metres), air suspension and augmented reality.

While there’s a clear difference between the executive E-Class and luxury S-Class, the gap between EQE and EQS is much smaller.

Mercedes has very cleverly managed to distil a lot of the range-topping EQS’s style, pomp and pampering into a smaller package, and has really pulled it off.

Until Audi launches its direct rival for the EQE, the A6 e-tron, and BMW reveals its i5, the EQE is right at the top of the tree of the electric executive car class.