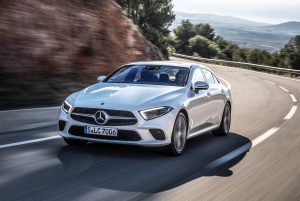 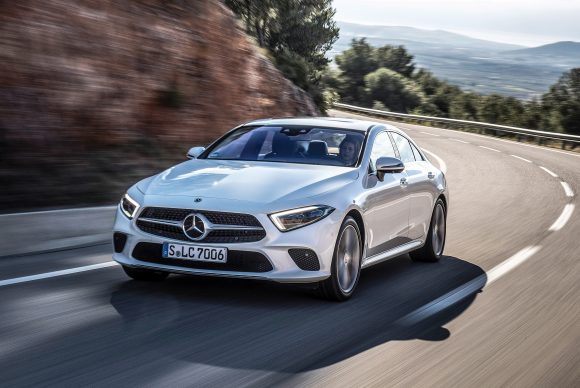 This is the latest incarnation of the Mercedes CLS – the German manufacturer’s swooping, elegant saloon with coupe styling. The original CLS broke the mould in terms of what a saloon could look like and, while the second generation failed to set hearts aflutter, this latest model looks to take on a little inspiration from the car that started it all. Fitted with Mercedes’ latest range of engines as well as a much-praised interior already seen in the E-Class, it’s for people who want to stand out and who don’t fancy a ‘conventional’ saloon.

There’s quite a lot going on here, actually. The exterior of the car uses Mercedes’ latest design language, and it’s easy to see the similarities in looks between this and the upcoming A-Class hatchback. However, the biggest changes are going on underneath the skin. A range of new engines has been selected for the CLS, giving buyers better performance – and importantly, more efficiency – than ever.

Our test car was the 350d model, which will undoubtedly be one of the most popular. Its engine produces 282bhp and 600Nm, which allow it to hit 60mph in just 5.5 seconds before reaching an electronically limited top speed of 155mph.

Despite this decent performance, Mercedes claims that the CLS will return 48.7mpg on the combined cycle, while emitting 156g/km CO2.

This car also uses 4MATIC technology, meaning drive is sent through a nine-speed gearbox to all four wheels, providing better traction in slippery conditions. If you’re after a little more punch, there’s a more powerful 400d version, which produces over 330bhp and an impressive 700Nm of torque, despite returning similar economy figures to the less potent 350d we’re driving here.

Our Barcelona test route was unseasonably covered in snow, so Mercedes opted to put all cars on winter tyres and 18-inch alloy wheels. As you’d expect, this does change the way the car rides – all vehicles ride on 19-inch wheels as standard, after all. So, the ride was just a touch softer than you’d expect. However, it was still clear that the CLS has solid steering, if lacking in feedback, and the engine is punchy enough from low speeds and refined at higher ones – we did get to drive on a cleared stretch of motorway for a while.

The new CLS certainly moves things forward from the previous edition, and if you look at the images of the next A-Class it’s easy to see where the CLS gets a lot of its looks from.

The headlights are flatter than before, giving it a more aggressive front end, while the long, rakish roofline  famed from the original remains. It’s instantly recognisable as a Mercedes, however, but perhaps lacks the drama of design that we’ve seen on models such as the E-Class Coupe.

The interior of the CLS takes a lot of design cues from the current E-Class and S-Class models.

The steering wheel, for instance, is straight from the flagship S-Class – buttons for the cruise control are now found here, rather than on a stalk mounted to the steering column.

Also, the CLS now comes with space for five rather than four people. Everything feels exceptionally well made, and the wood trim that the finishers used on the dashboard help lift the cabin, too.

The central plastic cubby remains a little less high quality; this is something we’ve noticed on other Mercedes models.

Here in the UK, buyers will only be able to choose AMG-Line specification vehicles, featuring a more dynamic exterior look. For a base price of £57,510, you’d hope there’d be plenty of kit – and the CLS delivers. A full leather interior comes as standard, as do 19-inch alloy wheels, a reversing camera and a 12.3-inch infotainment screen.

This final feature makes the biggest difference – we’ve already praised it in the E-Class Coupe, and having it fitted as standard is a real bonus. It transforms the look of the cabin and helps to make it feel particularly upmarket. A full DAB digital radio system is fitted too, although our test car featured an uprated Burmester stereo – part of the £3,895 Premium Plus package.

Top Gear said: ‘The original four-door coupe is back after what seems like an eternity. And blessed relief – it’s very good.’ Car said: ‘The CLS is an epically comfortable, appropriately wafty four-door coupe that’s loaded with interesting tech, a visually arresting interior and luxurious equipment levels.’

The CLS certainly makes for an attractive option compared with other, more run-of-the-mill saloons. It looks different, feels special inside and comes with an impressive amount of standard equipment. A fine range of engines means there’s something for everyone.