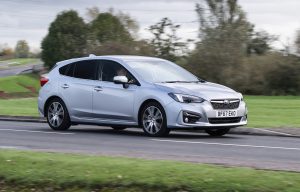 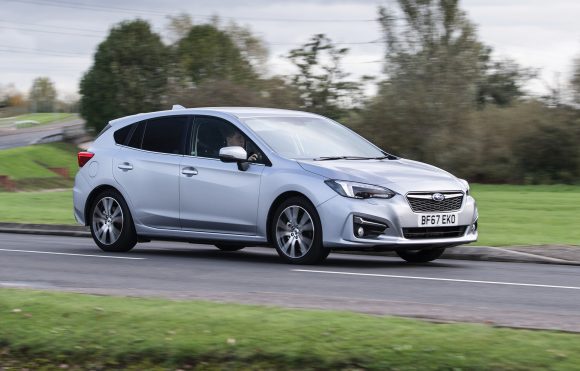 This is the latest version of Subaru’s Ford Focus-sized hatchback. The Impreza name dates back to 1992, and while it evokes memories of fire-breathing WRX and STI models for many people in the UK, Subaru explains that this car isn’t trying to live up to that reputation. Instead, it’s built in the image of the original, more modestly-powered model.

The car is new from the ground up, complete with a brand new platform that will underpin future models.

The focus, says Subaru, has been on better driving dynamics and safety – the latter taken care of by a whole array of safety gear, headlined by the brand’s ubiquitous EyeSight forward-facing dual-camera tech.

There have been plenty of changes under the skin, too. Subaru says the steering is now 0.1 seconds quicker to react (bear with us, it does make a difference), the already-low centre of gravity has been dropped further, the gearbox has lost 8kg of weight and the chassis is as much as 100 per cent stiffer in some areas.

There’s a choice of two engines: a 1.6 and a 2.0-litre, both naturally aspirated petrols. Subaru continues to use its ‘Boxer’ engine configuration, which keeps the centre of gravity low and means it can slide in the brand’s traditional ‘symmetrical’ all-wheel-drive system.

Unfortunately, performance from either option is pretty lacklustre. For now, we’d opt for the 2.0-litre: there’s a more usable amount of power, and unlike the wheezy 1.6, it has the added bonus of steering wheel-mounted paddles.

Subaru has done away with a manual gearbox option altogether, leaving only (gasp) a CVT. It won’t be to everyone’s tastes, but as CVTs go it’s not too bad.

Subaru has concentrated heavily on making the Impreza feel ‘safe’ on the road, which generally translates to predictable handling and almost unshakeable levels of grip, courtesy of its ‘active torque split’ four-wheel-drive system. The Impreza rides extremely nicely in fact, while body roll is kept reasonably well in check.

To our eyes the new model is an improvement over its predecessors although it’s a shame that Subaru has chosen not to offer the more attractive 18-inch alloy wheels of our test car on UK models.

As with the exterior, there are some definite improvements over the old car inside – though things are still inescapably Japanese. Material quality is still way off that of a Golf, or even a Mazda 3.

Things are pretty spacious, though. Boot space is competitive at 385 litres, and rear leg room is impressive too.

Adaptive cruise control is thrown in too, as are LED headlights that steer around corners, rain-sensitive wipers, keyless entry, a reversing camera, climate control and heated front seats.

Infotainment is taken care of by an eight-inch touch screen which – as per usual these days – works with Apple CarPlay and Android Auto, though no built-in sat nav is available.

Auto Express said: ‘Subaru’s latest Impreza sits head and shoulders above its predecessor.’ The Independent added: ‘In some ways this is a much improved Impreza.’

The previous Impreza had been all-but forgotten in the UK; and it’s likely that the new model will suffer the same fate.

There are big improvements over the old car, but without some major UK-centric tweaks to its powertrain and gearbox, it’ll continue to be a left-field choice.