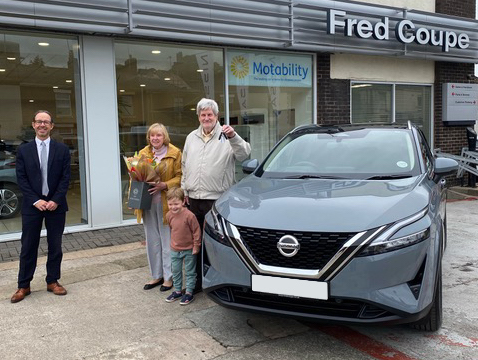 The first UK customer handover of the new Nissan Qashqai has taken place – on a landmark week for the manufacturer.

The venue was Fred Coupe Preston – with a delighted Jim and Beryl Grundy receiving the keys from John Coupe.

For Jim, this will be the fifth Qashqai he has owned and purchased from Fred Coupe Nissan.

He confirmed: ‘This is our fifth Qashqai in nine years and our third new one, so it seems we like them!

‘They have been very reliable for us and we love the stylish, innovative features of the car.

‘We have had excellent service from Fred Coupe over the years and we decided at their recent VIP launch to bring our purchase intentions forward.

‘I can’t wait to try out the petrol engine with the mild hybrid technology as I have been driving a diesel over the last two years.’

The new Qashqai range starts from £23,535 for the Visia trim level rising to just under £38,000 for range-topping four-wheel drive Tekna+ Xtronic.

The Premiere Edition is a special launch version with extra equipment such as a glass roof and comes with Nissan’s ProPILOT safety system.

John Coupe, director at Fred Coupe Nissan, said: ‘Since it defined the crossover category more than ten years ago, and despite the arrival of an ever-growing list of imitators, Qashqai is widely regarded as the leader in the segment.

‘We are thrilled that our dealership hosted the inaugural UK handover of the new car and wish Jim and his family many happy years of motoring.’

The handover took place during the same week Nissan announced plans for a new £1bn gigafactory and a new electric car in Sunderland.