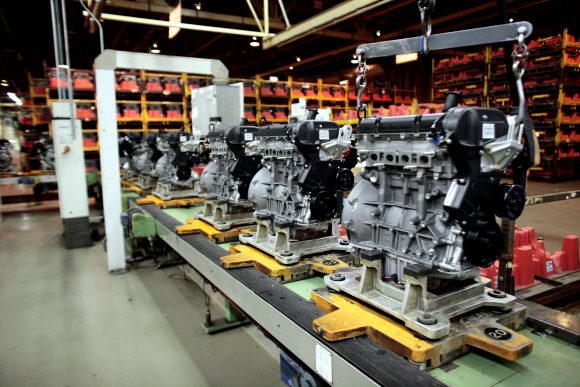 PLANS by car giant Ford for a shake-up of its European operations could lead to the loss of 1,000 jobs at one of its UK plants, sources claimed today.

The Bridgend engine plant in south Wales will be the hardest hit of any of the firm’s UK factories if the plans go ahead, the Press Association was told.

The company gave no details about job losses in the UK, but said it was starting consultations with unions to implement a ‘comprehensive transformation strategy’.

Shop stewards from Ford factories have now been given a briefing on the proposals.

Sources said the plans were for a total of 1,150 job losses in the UK, with almost 1,000 at Bridgend and the rest at Ford’s transport operations, which would affect lorry drivers.

The plans are for two phases of cuts at Bridgend, achieved by 2021/21, sources said.

Ford declined to confirm the figures and said it was consulting with unions.

The company announced yesterday that it would be speeding up plans to cut structural costs. It came on the same day as Jaguar Land Rover said it was axeing 4,500 jobs and Honda said it was halting production for six days after Brexit.

Unite national officer Des Quinn said: ‘What is being proposed at Bridgend is due to take place in two stages over two years.

‘It is a devastating blow for our members and their families, as well as having grave implications for the Welsh economy and the supply chain.

‘Unite is fully committed to opposing any compulsory redundancies and campaigning strongly for Bridgend to have a viable future. We will be consulting our members very closely in the days and weeks ahead.

‘There are a number of factors behind this grim news – the main ones being challenging market conditions for car-makers generally, a lack of a coherent industrial strategy from the UK government and the uncertainty created by Brexit.’