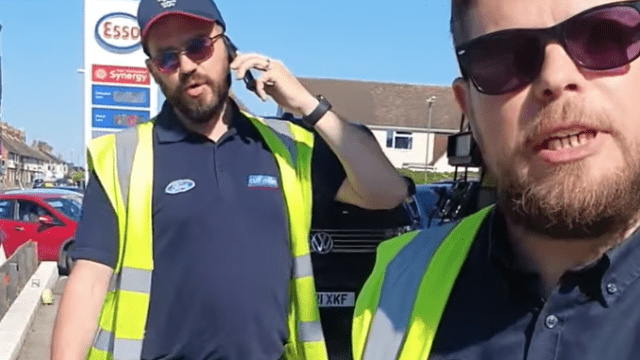 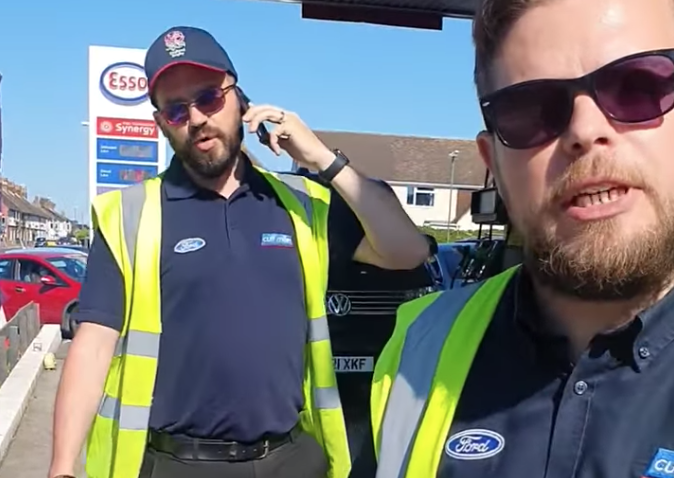 The managing director of a Ford dealership has been filmed swearing at a customer in a heated row on their petrol station forecourt.

Cuff Miller Ford dealer principal James Baxter – seen in the video wearing a baseball hat and talking on a mobile phone – is heard to threaten the man if he does not leave.

Baxter, who was wearing a Cuff Miller Ford uniform at the time, is heard to tell the man to ‘leave or I’ll f***ing make you leave’.

He is joined by Cuff Miller operations manager Michael Gates in the video posted on Facebook yesterday by user Nino Vydeenaden.

In the video, Baxter is heard to tell the customer to ‘f*** off’ nine times.

The row erupted with the customer after queues formed at petrol stations across the country as drivers clogged forecourts to panic buy fuel.

In a post that accompanies the video on Facebook, Vydeenaden said: ‘Being threatened with violence and police by staff at Cuff Miller for expressing my opinion.

‘The member of staff with blonde hair told me to “p*ss off and disappear” through my car window after I told him to calm down and stop getting so excited, it’s only a petrol station.

‘I had started to drive off until I saw him take a picture of my car which he refused to delete when I got out and asked him.

‘Almost immediately the senior member of staff came over and was swearing repeatedly at me after hearing a brief few comments from his colleague about what I had said, so then I got my phone out.’ 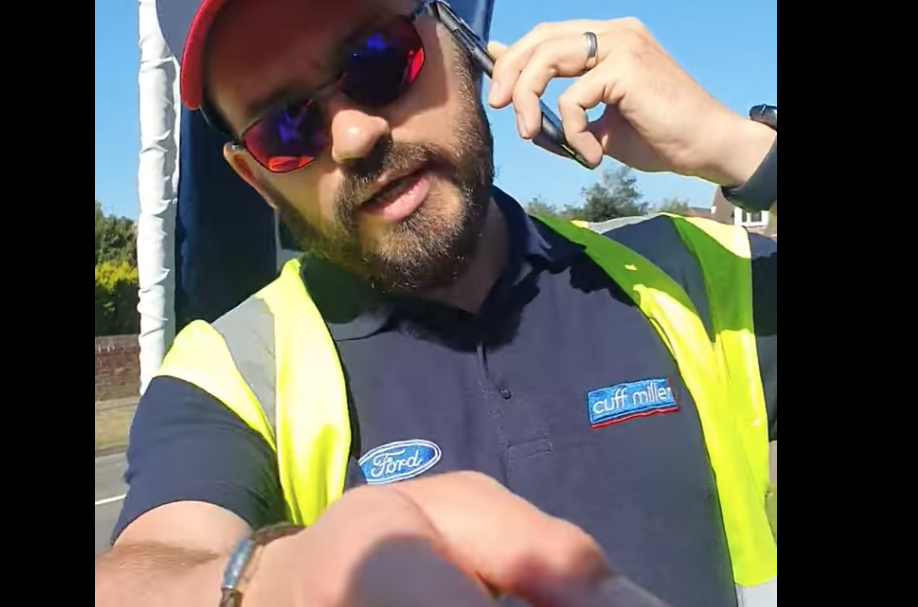 At one point Baxter and Gates, both of whom can be clearly seen in the video, discuss ‘picking up’ the customer in an apparent attempt to remove him from the site.

While the circumstances of the events that lead up to the altercation are unclear, the way the Ford dealership staff speak to the customer has caused upset online.

The video has been shared 143 times and has attracted nearly 200 comments.

In a statement issued to Car Dealer, Cuff Miller dealer principal James Baxter said the video ‘does not include any detail of the events’ leading up to it being recorded.

He claimed the customer started filming after ‘becoming abusive towards members of staff’ and said ‘the police had to be called’.

He said: ‘I would like to apologise unreservedly for both my language and indeed any member of the public that may have heard or been distressed by the situation.

‘I will admit that my concern for my team and frustration with one abusive individual got the better of me.

‘I appreciate in a professional context that it is not acceptable to use such language despite the provocation.

‘I do, however, view my colleagues not just as colleagues, but as friends. I am not excusing my actions, but when I feel that my friends are being threatened I become naturally upset.

‘I am pleased to say that we have served thousands of customers today who have been incredibly understanding, helpful and supportive.

‘We have received incredible messages of support, gifts and well wishes, all of which are hugely appreciated by myself and all the team, many of whom worked for 12 plus hours straight to try and minimise disruption and as best we could, help with traffic.’

A Ford of Britain spokesperson told Car Dealer the company will be speaking ‘urgently’ with the dealership.

They said: ‘Thank you for bringing this matter to our attention. It would be inappropriate for us to comment at this stage without a better understanding of the circumstances of this incident and we will be talking urgently with the dealership.

‘However, we do not condone the use of inappropriate language at any time.’