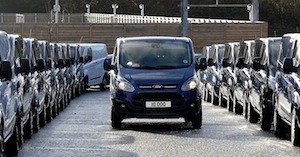 FORD’S all-new Transit Custom has reached 10,000 sales in the UK in the first 12 months of its launch.

More than 5,500 Transit Custom vans have been sold to a number of fleets in the UK, with Kelly Fleet Services placing the biggest order yet with 232 vans.

According to Ford, the Transit Custom has also become a popular choice for “artisan businesses” across the country, accounting for nearly 50 per cent of total sales.

The new Transit Custom was designed and engineered at the Ford Dunton Technical Centre in Essex and is powered by a 2.2-litre Duratorq diesel engine built at the Ford Dagenham Engine plant.

He added: ‘As Ford continues its product onslaught, it is also investing to meet the precise needs of its business customers by introducing 100 specialist Transit Centres across the UK.’