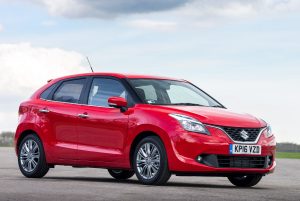 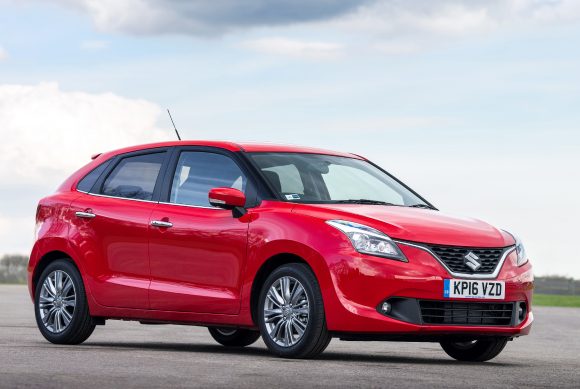 This new entry to the B segment has much to commend it, finds Laura Thomson, even if it doesn’t have an obvious edge

A stylish, large B-segment hatchback and with a total weight of under 935kg, the Baleno is significantly lighter than competing models, with an interior length of 2.64m and a 320-litre boot capacity. It comes in the lower-spec SZ-T grade, with a 1.0-litre Boosterjet engine, or the more comprehensive SZ5 grade with the 1.0-litre Boosterjet or a 1.2-litre Dualjet + Smart Hybrid Vehicle System.

Suzuki’s Boosterjet technology allows it to offer the same level of power and torque as a much larger (1.8-litre) naturally-

aspirated engine. Its frugal 1.0-litre, three-cylinder engine produces 109bhp and 170Nm of torque. Suzuki also claims to have abolished turbo lag with the utilisation of an air-bypass valve.

Both grades feature an extensive standard spec list, including smartphone linkage and a satellite navigation system. The higher grade SZ5 also features automatic air-conditioning, a full entertainment and communication system, electric rear windows, adaptive cruise control and radar brake support – not bad for a hatchback priced at under £14,000. However, the Baleno feels slightly dull and plasticky on the inside. The grey fabric seats, while outdated, are surprisingly capacious (remember the 2.64m interior length), and when folded flat make for an impressive load bay. A seven-inch display in the centre of the dash hosts the satnav and other features, while neatly arranged in between the analogue dials is a 4.2-inch advanced multi-information LCD display.

Despite being comfortable and pleasant to drive, the Baleno doesn’t have an obvious edge over its competitors. It is nippy on country roads and corners quickly yet feels unrefined on motorways, with more road and wind noise than would be expected. Unfortunately, the car has unnervingly light steering, and slight body roll because of soft suspension. There’s always a silver lining, though, and in the Baleno it comes in the form of the third of its five gears, which is torquey and enjoyable.

AutoExpress says: ‘The Suzuki Baleno is a bit of a hidden gem in the supermini class. It’s fun to drive, practical, comfortable and reasonably cheap to run.’

The Baleno has the potential to appeal to a wide customer base. However, with so many other, more-established options available, it will face difficulty breaking into the segment – something that Suzuki appears to have anticipated, tentatively predicting UK sales figures of only 3,500 in the first full year.