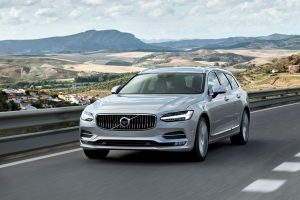 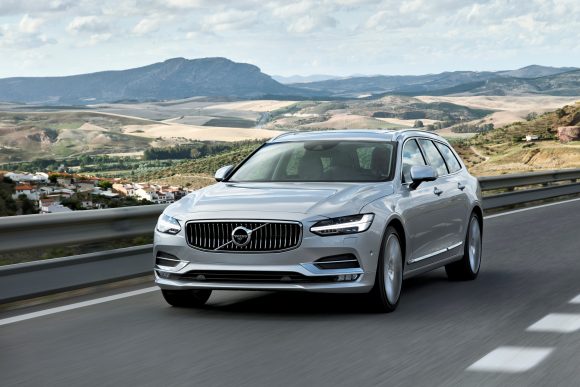 Hot on the heels of Volvo’s all-new XC90 premium SUV comes the latest version of its V90 large estate car. Given that Volvo’s image is almost inextricably linked to big estate cars, the V90 might be the most important model for the brand right now.

If you’re already familiar with the XC90’s powerplants, there’ll be nothing to surprise you too much here. The V90 will initially ship with the front-wheel drive D4 and four-wheel

drive D5 diesel engines, with the T8 Twin Engine hybrid coming later in the year. There’s no plan to bring the petrol T6 to the UK at the moment. The D5 is equipped with an electric supercharger that Volvo terms ‘PowerPulse’, designed to compress air to be fed into the turbocharger at low engine speeds to eliminate turbo lag. Whatever your engine choice you’ll find it’s paired to an eight-speed automatic gearbox.

The V90 matches the XC90 in terms of interior design, with a minimalist yet pretty plush interior majoring on natural materials. Standard equipment on any grade includes full leather, navigation, an eight-inch TFT screen, two-zone climate control, DAB radio, heated front seats and LED headlights, along with a power tailgate – upgraded to hands-free on Inscription models. Of course it wouldn’t be a Volvo if there wasn’t a decent array of safety kit, and the V90 includes city safety, pedestrian and large animal detection, adaptive cruise control and pilot assist.

The V90 is a consummate cruiser, devouring huge tracts of motorway without any kind of fuss. It’s quiet enough to hold a reasonable conversation in at any day-to-day road speed, with only a little flutter of wind noise coming from the roof rails. On the more interesting roads, you won’t find the V90 wanting. With the drive mode set to Dynamic, it becomes quite a capable point-to-point car and the D5 engine is plenty good enough to give the car a decent turn of pace.

Car magazine remarks that ‘packed with technology and handsome too, the V90 is genuinely desirable’.

There’s no doubting the premium credentials of the V90. It’s a treat to get in to and provides a completely drama-free driving experience. Provoking it into a spot of high jinks reveals a surprisingly grippy vehicle with a decent turn of pace, but you’ll need to select the ‘dynamic’ suspension setting and take manual control off the gearbox to make the most of it, otherwise the ‘box can be slow to kick down and the body can wallow a little. However, it almost feels uncouth to do such things!