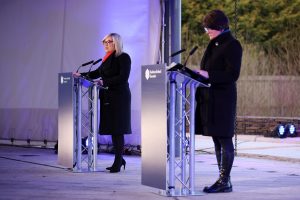 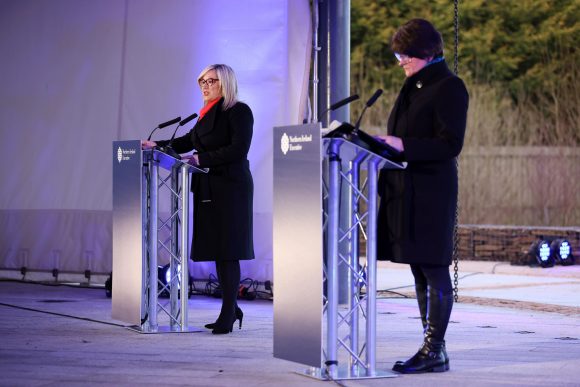 Northern Ireland’s car dealers now face even more weeks of misery after the country’s lockdown with only click-and-deliver being allowed was extended further.

It was due to end on February 5 but yesterday (Jan 21) Stormont’s executive ratified a proposal by health minister Robin Swann to keep the tough restrictions until March 5 to drive down cases of coronavirus.

It’s even possible they could remain in place until Easter.

A review will be held on February 18, but it’s a major blow to the trade in Northern Ireland, following a positive start to 2021 with the reversal over a post-Brexit VAT anomaly that had been costing dealers dearly, as reported by Car Dealer.

First minister Arlene Foster, seen right with deputy first minister Michelle O’Neill during a media briefing, said: ‘I appreciate that this will be disappointing to many people listening to us this evening.

‘I think particularly of those who are feeling the pain of separation from loved family members and friends, for workers and employers worried about their livelihoods, and indeed parents who are juggling the education of their children with work and other responsibilities.’

Michael Tomalin, chief executive of City Auction Group, which has centres in Belfast and Omagh, told Car Dealer today (Jan 22): ‘No doubt the cases and deaths remain the highest in the region since the start of the Covid lockdowns.

‘Hospitals are reporting they are operating at over 100 per cent capacity, which is a key performance issue.

‘In addition to this, recent confirmation that military medical staff will support the NHS staff in the next three-to-four-week period confirms just how serious the issue is in Northern Ireland.’

He added: ‘From a business perspective, the click-and-deliver lockdown restriction remains, which is controversial as the only region in the UK adhering to this policy.

‘It’s challenging for the franchised dealer groups and independent car retailers to keep momentum during the third now-extended lockdown period.

‘However, reports are positive that the automotive industry remains open and available to conduct business, with the recent win with the VAT margin scheme reversal providing retailers and auction houses with some form of encouraging news during this unprecedented time.

‘The next period is crucial. With a further extension now confirmed for a further six weeks, the motor industry awaits to see if the current demand remains after an initial new year surge.

‘We as a business reopen our Belfast centre next week for the first time since the start of 2021.

‘We’ll have two market-leading dealer group part-exchange and corporate fleet and finance auction events offering 600 vehicles to see if there is a current demand for our motor industry partners to purchase fresh stock at this time.’