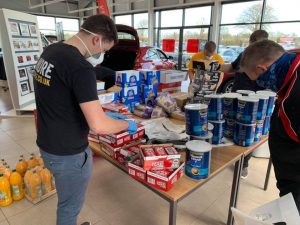 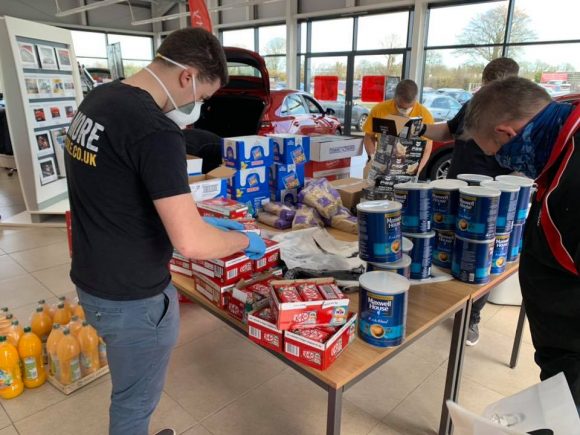 A Kia dealership in Pembrokeshire stepped up to the mark to help NHS frontline staff by transforming its showroom into a hub for food hampers for the key workers.

Gravells Kia Narberth became a ‘drop-off and assembly point’ for the project, which was initiated by branch managing director Ian Gravell.

A Round Table member for some 15 years, he told Car Dealer Magazine that he was inspired by another branch of the association that had started doing the same thing, so he contacted the five Round Tables in his area – Tenby, Haverfordwest, Milford Haven, Fishguard and Narberth – and within 24 hours they were all on board.

They each contributed £300 to pay for the services of a food distributor, which had ‘a glut of food’ as normally they’d be supplying restaurants for the Easter holiday.

A deal was struck and the food was delivered to the Kia Platinum status showroom in Narberth, with all the Round Tables meeting there to make the 16 food parcels – all the while observing guidelines on hygiene and social distancing.

The hampers were then loaded into a Kia Sportage owned by an A&E nurse customer of the Narberth dealership, who delivered them to the local hospital.

‘It was nice doing something different rather than sitting at home watching repeats!’ Ian said to Car Dealer, but he also stressed how important it was to help the NHS staff.

The dealership is keeping in regular contact with certain customers by phone, too, just to check that they are OK, as well as supplying free bottles of water to carers, who are working night and day and sometimes can’t get to shops, so that they can keep them in their cars. Bottles are also being taken to doctors’ surgeries.

‘It’s going to get harder, so we’re very happy to do anything we can to make things better,’ added Ian. ‘There is something very satisfying about doing it as well.’

He highlighted the recent Covid-19 deaths of nurses Areema Nasreen and Aimee O’Rourke, and said: ‘We’ve got to help these people somehow, haven’t we?’

MORE: How can businesses help communities during the crisis?