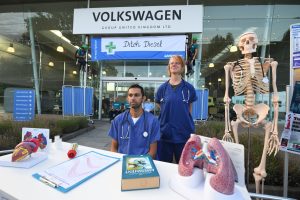 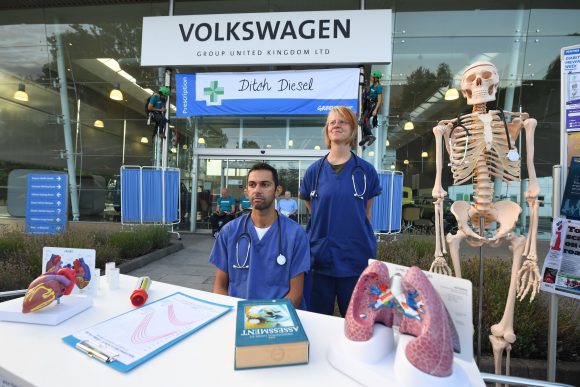 The environmental organisation launched the stunt at the car brand’s office in Milton Keynes about 7am.

A spokeswoman said activists had barricaded entrances to the building and set up a mock clinic offering health advice to staff and members of the public.

It claimed that more than 800 Volkswagen staff employed at the site – in roles such as marketing and distribution – were being prevented from entering.

Concerns over emissions of nitrogen oxides have grown since Volkswagen was found in September 2015 to have fiddled air pollution tests for 11 million diesel vehicles worldwide, including 1.2 million in the UK.

Greenpeace is demanding that the firm commits to stop producing diesel cars and switch to only manufacturing electric models.

An estimated 40,000 premature deaths a year in the UK are said to be caused by air pollution, which is linked to health problems such as childhood illnesses, heart disease and dementia.

‘Volkswagen sold us a lie about diesel being clean. Its diesel addiction is seriously harming people’s health. Volkswagen won’t meet with us and won’t listen. So today we’ve brought the truth about diesel to its doorstep. Volkswagen must face up to its responsibility for deadly air pollution and commit to end diesel production now.’

Aarash Saleh, 33, a doctor in respiratory medicine who is among a group of medical professionals at the protest, said: ‘Diesel pollution is causing horrendous suffering across the UK and storing up a lifetime of troubled health for our kids.

‘If you could see it, diesel would be banned tomorrow.’

It is almost 12 months since Greenpeace activists prevented a cargo ship carrying cars – including Volkswagen diesel models – from reaching Sheerness port in Kent by using boats to climb on board and hang from its 89ft-high unloading door.

Responding to today’s action, a VW spokesman said: ‘Volkswagen is aware of a protest at its Blakelands premises this morning. The safety of our employees is our principal concern and so the matter is now being handled by the police.

‘The Volkswagen Group has launched the most comprehensive electrification initiative in the automotive industry with “Roadmap E”. This will bring an additional 80 new electric vehicles to the Volkswagen Group model range by 2025.

‘Roadmap E brings a 20 billion euro investment to electric vehicle technology, with the goal of 25 per cent of Volkswagen Group vehicle production comprising electrified vehicles by 2025 and 50 per cent by 2030.’

The peaceful protest ended at 3.30pm after Greenpeace said Volkswagen agreed to meet the campaign group.

A Thames Valley Police spokesman said officers went to the scene and 24 people were reported for summons on suspicion of aggravated trespass. They will be told to appear at Milton Keynes Magistrates’ Court at a later date.

MORE: ‘We will be part of the solution on diesel’ – VW boss