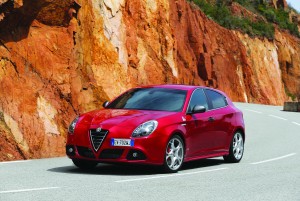 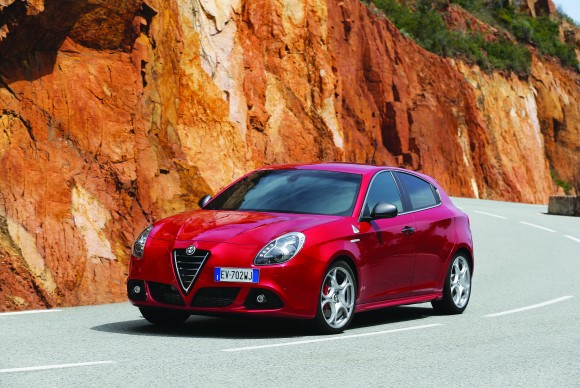 ITALIAN firm has given its hot hatch an extra dose of fun with a new engine from the 4c sports car. Leon Poultney reports.

The spiciest ‘meat-a-ball’ (sorry, we couldn’t resist) in the Italian marque’s line-up of hatchbacks. Boasting the engine and drivetrain from the almighty 4C sports car, the Giulietta Quadrifoglio Verde (QV) certainly means business. Despite its performance intentions, it remains an altogether classy proposition, marking it out from the bustling hatchback crowd.

The same direct-injection 1,742cc turbo petrol aluminium block unit that’s found in the 4C. And it develops the same horsepower output too. But because the QV still has to serve as a weekly shopping mule, it doesn’t quite boast the same impressive figures as the 4C. The 0-60mph dash is dispatched in under six seconds, and clever engine fettling sees around 40mpg returned on the combined cycle and CO2 emissions reduced to a Euro 6-friendly 162g/km.

This is a range-topping £28k Alfa, so there are figure-hugging leather and alcantara sports seats, a flat-bottomed steering wheel and a number of sporty exterior styling highlights (sideskirts, Brembo brake calipers, glossy mirror caps). The infotainment element consists of the typical Alfa 6.5-inch Uconnect multimedia system that’s both clunky to use and slightly cheap-looking.

It’s quick, but despite Alfa’s constant reminder that it shares underpinnings with the 4C, it doesn’t offer the same level of driver interaction. Regardless, steering is direct when the DNA driving mode selector toggle is flipped to ‘Dynamic’ and throttle response is sharp. Niggles include the gearbox that, when in full auto setting, tries to instantly kick you up to the highest and most economical gear possible, even in ‘Dynamic’ mode. An engine note actuator has also been employed for the first time, meaning that luscious, rich Alfa exhaust note is piped directly into the cabin. It’s just a shame it’s synthesised and passers-by aren’t treated to the same levels of aural enjoyment.

Car Magazine said: ‘Beauty is subjective, but the Giulietta has style that perhaps no other hatch can match. Yet it’s outgunned in terms of equipment, speed, running costs and even emotion.’

It certainly looks exotic but it’s difficult to see it stealing sales from quicker, more fundamentally sound hot hatches currently available. Its premium approach will certainly attract those wanting to shy away from the ‘hooligan’ image of a hot hatch, but the £30k-tickling price tag puts it in the ring with some very heavy hitters.