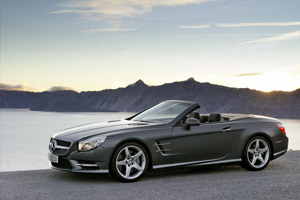 THE new version of Mercedes-Benz’s GT icon, the SL, is as posh and fuel efficient as ever. James Batchelor has driven it

It’s the entry-level version of the new sixth-generation SL, powered by a 3.5-litre V6 rather than the more expensive and potent V8 and V12 units further up the range. Having said that, it still costs £72,495 and offers the thrills and luxuries SL buyers have come to expect from this classic GT car.

More than satisfactory – but that’s what you expect from a car costing this much. Standard spec includes 18-inch alloys, climate control, cruise control, leather and more. Our test car had a whopping £13k-worth of options, with highlights being the comfort seats at £745; £575 Airscarf neck-level heating and the £1,150 Harman Kardon surround-sound system. We would probably avoid the £2,610 Magic Sky Control panoramic vario-roof – it’s a nice idea in St Tropez but not in Preston.

The SL is a grand tourer in the best tradition – it’s good for wafting, posing, blasting through countries, but less good at the race track. The steering is a little light and the brake pedal lacks a bit in feel, but the throttle response is spot-on and the seven-speed ‘box is quick to change gear in all modes (eco, manual, sport). One major surprise was the really rather excellent ride quality – even on our car’s 19-inch wheels – and the aural pleasure the singing V6 gives.

Auto Express said: ‘At this end of the market, many buyers will be tempted to spend the extra £11,000 on the Mercedes SL500. Although it doesn’t have the effortless punch of the turbocharged V8 model, this car is definitely the pick of the new SL range.’ Autocar said: ‘This baby SL is also the best [in the range].’

Certain people may look down their nose at the entry-level V6, deeming it to be under-powered and a little limp-wristed. But it certainly isn’t – in fact, the V6 is probably the pick of the range for very good reason, offering decent power and acceptable running costs. The new SL once again builds upon its reputation as the default choice in this sector for those customers looking for style, power and quality. 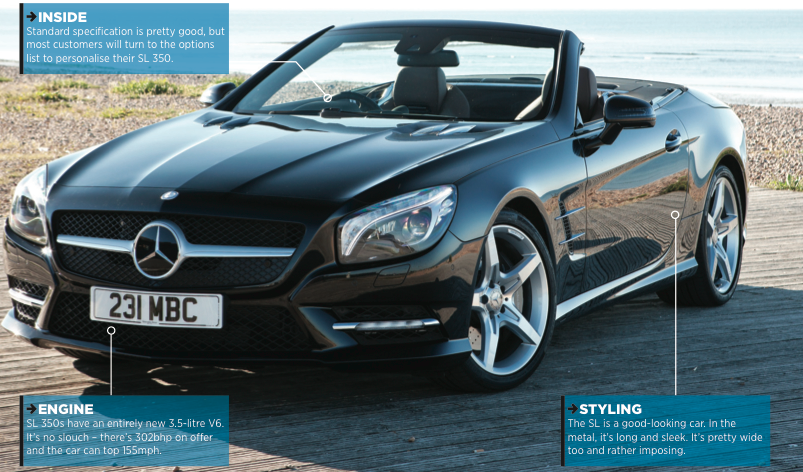