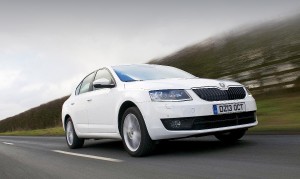 SKODA has pushed the new, third-generation Octavia upmarket. But has it worked? James Batchelor reports

It’s the latest iteration of a car Skoda calls the ‘heart of the brand’. The new Rapid takes on the value-focused proposition of the previous generation Octavia, allowing the new Octavia to be a little more expensive and just a little more stylish. An estate variant arrives later in the year, as does a hot vRS model. The Octavia hatchback appears in showrooms on Saturday, March 16.

Like any other Skoda, the svelte Octavia comes in three flavours: S, SE and Elegance. The predicted best-seller will be the SE which kicks in at £17,190 and throws in rear parking sensors, dual-zone air con, front fog lamps, trip computer, rear electric windows and body-coloured door mirrors.

We got behind the wheel of the 1.2, the 1.6 and the 2.0-litre and we were particularly impressed with the first. When mated to the very slick six-speed ‘box, it’s a zingy little thing that provides plenty of get-up-and-go, despite the Octavia’s large dimensions. It’s composed, grippy and safe – not Ford Focus levels of driver involvement, but above the class average.

Auto Express was impressed, saying: ‘The new Octavia will provide the VW Golf with a big challenge – it’s a great car. It may lack the Golf’s cachet, but for an increasing number of Skoda buyers, that doesn’t (and shouldn’t) matter much at all.’

While prices have risen, it’s still good value, and although the dumpy looks of the old car have made way for a stronger, more design-led approach, the new Octavia is still rather undramatic to look at. Overall the new Octavia is a car that will be purchased with the head rather than the heart. But who said there was anything wrong with that?