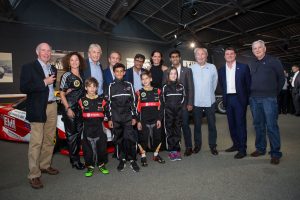 Close to 200 people filled Hexagon’s flagship showroom on Great North Road in north London on Tuesday 5 July and enjoyed an evening with a star-studded panel of drivers who shared their stories and memories of one of the world’s greatest motor races.

They were joined by a host of celebrity guests including ex-F1 driver and current Formula E star Karun Chandhok, Manish Pandey, writer and producer of the brilliant 2010 film ‘Senna’, and ex-F1 driver John Watson MBE, who drove for Hexagon’s privateer entry F1 team in 1974. 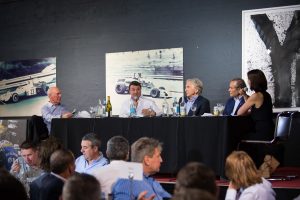 Coys auctioneer Chris Routledge revved up the bidding in the charity auction with highlights including a Julian Opie painting, which sold for £3,000, as well as a tour of Ford’s Heritage Collection and a ride in a 1966 Le Mans replica GT40 sold for £2,000.

Hexagon is an official dealer of some of the most prestigious brands in the world, run by one careful owner, Paul Michaels, for more than 50 years.

On SuperUnleaded.com: Man Avoids Head-on Collision, Rolls His Car Instead