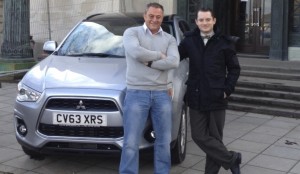 Hollywood star crosses over to ASX with Swansea dealership

A SWANSEA Mitsubishi dealership had a brush with fame when it lent Hollywood star Elijah Wood a car while he was filming in the city.

Celtic Mitsubishi, in Victoria Road, Gorseinon, stepped in to offer the actor a Mitsubishi ASX while the 33-year-old was in town to shoot Set Fire To The Stars, a film about Swansea-born poet and author Dylan Thomas.

Elijah, famous for his roles in The Lord of the Rings and The Hobbit, plays John Malcolm Brinnin, the agent of Thomas in the film. He and his driver used the ASX for three-and-a-half weeks, clocking up 2,500 miles while he was in South Wales.

Phil Reason, of Celtic Mitsubishi, offered to lend the star the car after speaking to his friend, entertainer Mal Pope, Director of Swansea-based YJB Films, who co-produced the film.

Tim Moorhouse, Sales Executive at Celtic Mitsubishi, met Elijah on set outside Swansea Guildhall. Pictured with the star here, he said: ‘It was great to be able to meet him and he was very easy-going and really friendly. We spent quite a bit of time chatting away and he signed some things for me.

‘He said he had enjoyed his time in South Wales, even though it didn’t stop raining the whole time he was here, and he really liked the car. He’s coming back for the premiere so hopefully we will lend him a car again then.’

Tim also got to meet Celyn Jones, who plays Dylan Thomas in the film, and a number of the other actors.

Set Fire To The Stars is the only movie being shot to mark the 100th anniversary of the birth of the poet. Filming took place at Bay Studios in Swansea Bay, along with a series of other locations in the city.