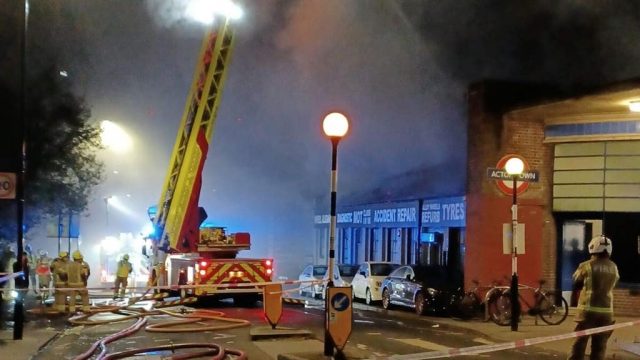 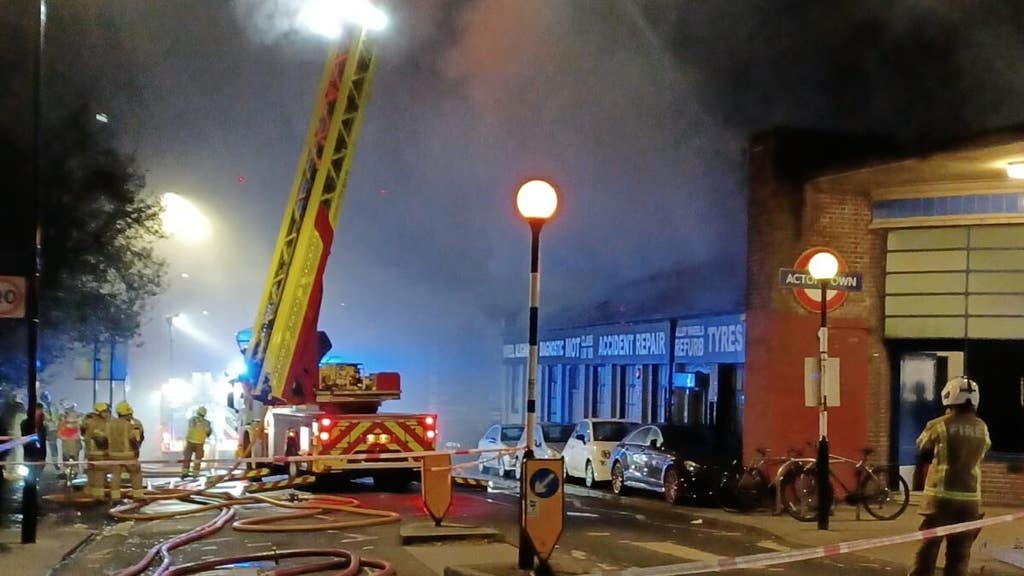 Shocking new images show the heart-stopping moment around 70 firefighters took on a huge blaze at a London garage.

Ten fire engines rushed to the scene – believed to be Auto Car Centre – next door to Acton Town Tube station after a flurry of calls just after 5pm yesterday (Feb 1).

Flames could be seen billowing from the top of the garage, which offers MOTs and repairs among a range of services.

Three men were forced to leave the property as the fire raged, with 35 people evacuated from the area as a precaution.

The London Fire Brigade (LFB) said there were a number of gas cylinders inside the garage, which firefighters cooled to an ambient temperature as they were at risk of exploding due to exposure to the extreme heat.

The Metropolitan Police said the LFB had the fire under control by around 11pm.

An LFB spokesman said last night: ‘Ten fire engines and around 70 firefighters have been called to a fire at a car garage on Bollo Lane in Acton.

‘Firefighters are tackling a fire at a single-storey car garage. The brigade’s control office has taken 15 calls about the fire.

‘The brigade was called at 1710. Fire crews from Acton, Chiswick, Ealing, Park Royal and other neighbouring fire stations are at the scene.’

Local residents were advised to keep their windows closed because of the smoke.

Members of the public described the scenes as ‘crazy’ and ‘apocalyptic’.

The District and Piccadilly Tube lines, which both travel through Acton Town, were affected by the fire.

The LFB said about 10pm that firefighters would remain at the scene for the next few hours to dampen down the area.

The team are on scene at a fire on Bello Lane Acton.